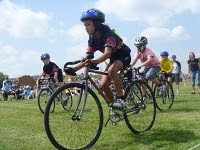 Now with it’s newly attained Clubmark status Cycling Club Hackney ran the third round of their Grass track League as a Go-Ride race alongside the Festival of the Bicycle at Maybley Green on the 31st of July 2011. The venue is a short sprint from the 2012 Olympic Velodrome and we can only hope for similar beautiful weather this time next year. Cyclist’s came out in large numbers to enjoy the festival and the racing – with fifty riders ignoring the heat and getting down to some serious and not so serious racing. 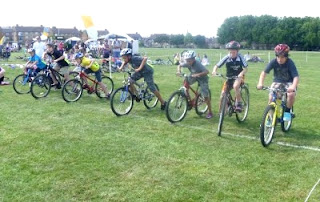 The start of the MTB scratch race won by Murray Cohen.
The races were ran in four age groupings – Under 8’s, Under 12’s, Under 16’s and 16 plus. The club provided track bikes for those with ability to ride a fixed gear and trained up rider’s who had never tried the purest of cycling disciplines. For those unsure of having no breaks on a tight 200m circuit separate races were ran on mtbs.

Wojeck and Alexander led out the first tandem race but were beaten on the back straight by Matthew and Rachel.
The riders had a variety of races in which to shine, beginning with a flying lap time trial from which riders could be graded for the 3 lap Scratch, Roadie Pursuit and Devil races. Interspersed with this 16 brave souls rode two separate tandem races both of which were very close and pulled the spectators away from the many stalls at the Festival of the Bicycle – just as well as the festival organiser – Sophie Powell – was powering one of the tandems. Alongside food and bike related stalls there were also all- ablility bikes for anyone to try out and a track stand competition.
The final races were Team pursuits that comprised of mixed aged teams with 6 in each team. The teams were led out for the 1st lap by an under 8’s rider, 2nd lap an under 10’s rider, 3rd lap U12’s rider, with the final lap leaving each team with three riders made up of U16’s and 16+ riders. The teams were under strict orders not to overtake the three lead-out members, which made for very close racing. 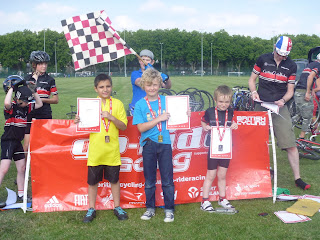 8 and Under Roadie Pursuit podium l-r Joshua 3rd, Alfie 1st, Robbie 2nd.
Following this Go-ride certificates and medals were handed out along with a variety of prizes generously donated to the festival including two free entries to the upcoming Cycletta events for women. All agreed it was a very successful event . Full results here and more images here.
Posted by Neil at 19:02