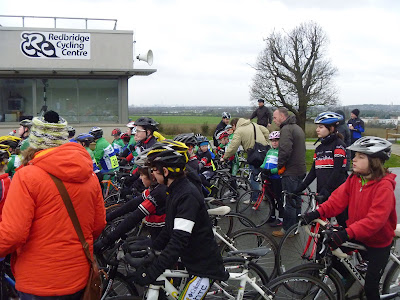 Logan, Isaac, Frank, Artie, Jessie and Sam wishing the starter would hurry up and get them moving...

A very wet and blustery Saturday didn't deter CCH juniors from turning out in force for Round Three of the Lee Valley Youth CC Winter Series at Hog Hill on the 26th February. 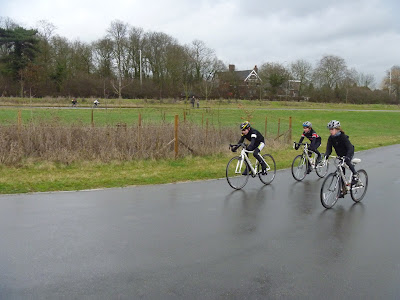 Isaac, Logan and Louis on the lower circuit.

First up were Artie and Kai in the U10s with Isaac, Logan, Jessie, Frank, Louis and Sam in the U12s. Jessie was the 1st place girl with Isaac and Logan coming in a creditable 7th and 8th. 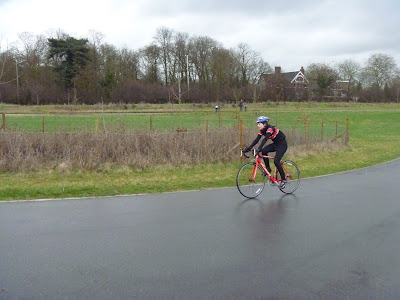 Jessie on her way to 1st place.

Following them in worsening conditions were Garvey, Mostyn and Ned in the U14s and Alex in the U16s. 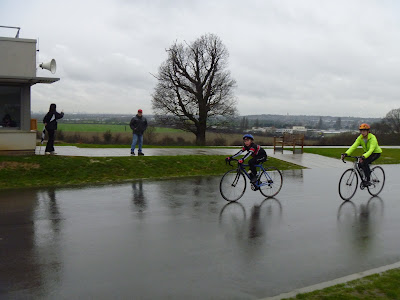 Ned and Garvey enjoying the rain.

Full results of Round 3 can be found here.

Later on it was the turn of the coaches to suffer the rain as Andy and Harry had a ride in the 4th Cat' San Fairy Ann Spring Circuit Race 1- for a report and results click here.

Rhys Howels's has picked up enough British Cycling racing points already this season to gain his second category license. He's done this by braving the weather and getting stuck into the winter series races over at Hog Hill. Notable scores were a 2nd and a 1st place win. Full results and more pictures can be found here.
Big Rhys will be using his serious power output to target open individual time trial events this year. Also on the open road (CCH are now members of ERRL*) our man will be entering Eastern Road Race League events and joining CCH's team in Hackney Homes's Alpine Challenge fund raising effort in the Tour l'Ain four day stage race. 10th - 13th August. Other riders to enter so far in this testing contest will be the aspiring Alex Peters and Clem Berril.

* Saturday May 21st 2011 is the date for CCH's 1st Road Race in the ERRL. Regional B for 3rd & 4th category riders. Distance 54m. Four laps around the Bulmer course on the Essex Suffolk boarder. Members are invited to help deliver this open race successfully. A meeting to go over this event and assignment of duties will be called in due course. 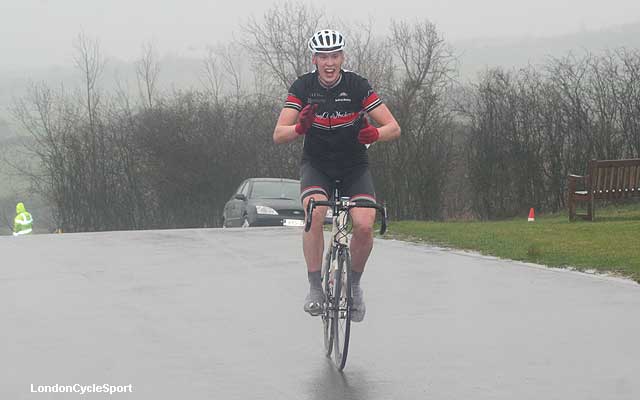 Nicola Baboneau had her leaving do last Wednesday night at The Learning Trust. The event was very well attended, all gathered together in recognition of Nicola's work and dedication in Hackney over the years. She has been instrumental in many community initiatives, one of them was managing the relationship between TLT and CC Hackney.
I presented my manager for two years with a CCH club shirt in honor of her excellent support to the club from day one. Since then I've heard that Nicola is planning on training for cycle races...she was warned that our shirts have a stimulating effect. I'm very happy that Nicola has joined our club, a great signing, a real and proven talent. 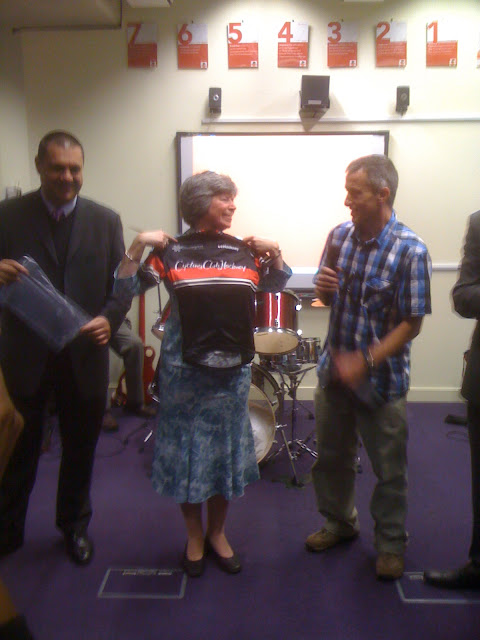 For information about 'Cycling Uganda' and news coverage of a linked youth exchange project set to run from 2011-2012 check the link here. 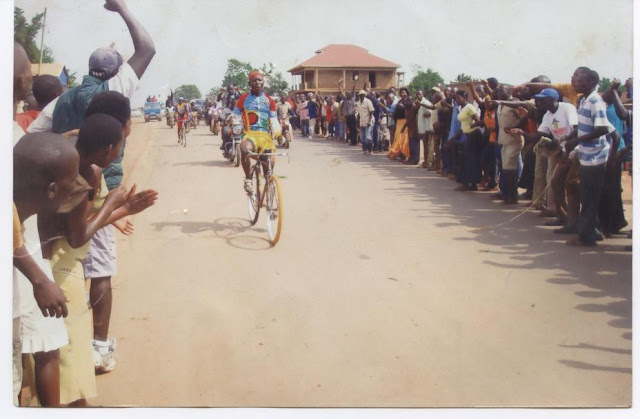 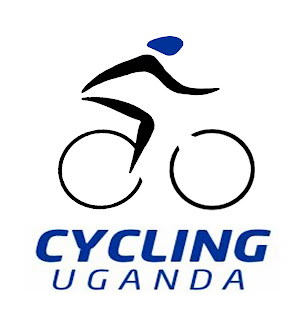 http://cyclinguganda.blogspot.com/
Posted by Keir at 22:34 No comments: 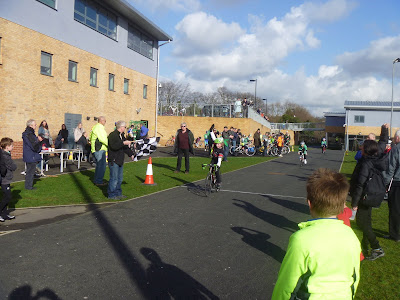 Leonard wins his heat in the Under 10's.
Saturday 12th February saw the CCH juniors out in force again for Round 2 of the LYVCC Winter series at the tight Higham Park circuit. After an enjoyable ride over in the sun via the Crooked Billet and the old dog track the riders got down to racing in earnest on the 550m circuit at Highams Park School- where its small size meant larger fields had to race in heats then a final. 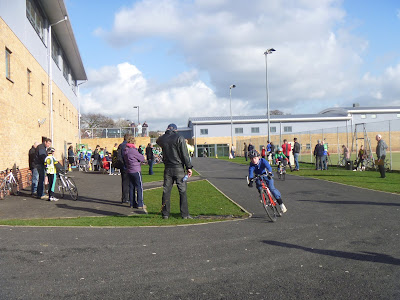 Ewan in the under 10's.
Leonard, Ewan, Elliot and new rider Cameron went well in the Under 10's with Leonard winning his heat and getting 4th in the final. 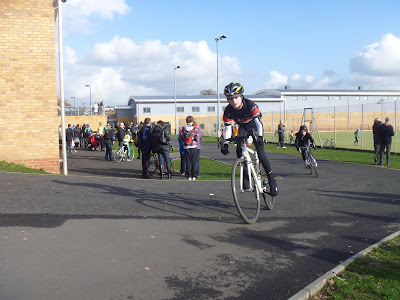 Isaac on his way to 9th place.
Bede, Logan, Isaac, Joe, Jake, Sam, Louis and Frank rode the Under 12's where Bede got a fifth place in the final. Unfortunately Frank found that netball and cycling don't mix when he had an accident whilst warming up and had to retire early but he may have invented a new sport... 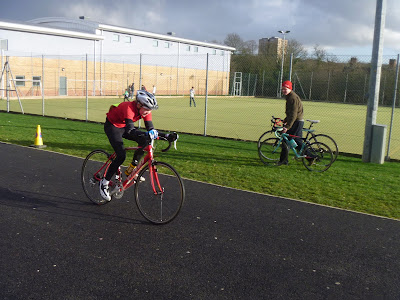 Mostyn in his heat.
Mostyn and Jack rode in the Under 14's whilst Alex placed 8th in the under 16's. 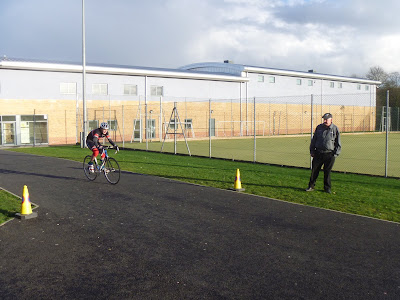 Alex on his way to 8th.
The smallness of the circuit means spectators can see almost 90% of the racing and nearly all of the crashes where riders ran off the tight corners - making for exciting if nervous viewing for watching parents.
Full results here. More pictures here.
Posted by Neil at 20:58 No comments: 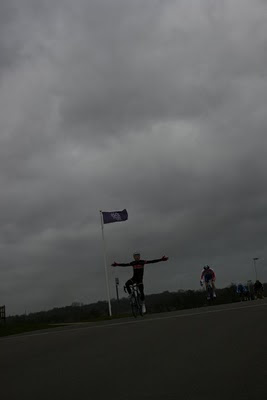 Tao Geoghegan Hart has won the 2nd & 3rd category adult race held at the Hog Hill racing circuit in Redbridge. The conditions were very windy as illustrated by the taught and horizontal flag flying next to the finishing area. Tao crossed the finish line arms out stretched looking like the Angel of the North, an equally notable achievement given that he stayed upright and was not blown over, saving himself an embarrassing moment.
Well done Tao! 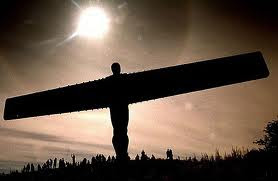 Keep Racing on the Roads 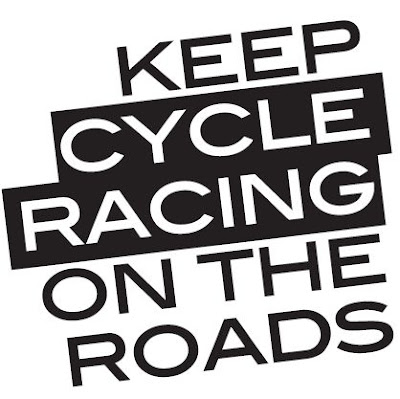 Keep Racing on the Roads - February 2011

British Cycling's campaign to secure the future of road racing in the UK continues. They are lobbying parliament with a view to changing the outdated laws concerning road races for cyclists and trying to find a way to reduce policing charges. Read the full article on the British Cycling website here.

Meanwhile over at the London Cycle Campaign the 'No More Lethal Lorries' appeal aims to reduce road danger to cyclists. This is extremely pressing as yet another cyclist is in a critical condition after an accident involving a lorry at Dalston Junction this week. The five point strategy is as follows -

2 Drivers must take more responsibility- Authorities must recognise driver responsibility for doing everything practical to reduce risks. Blaming a ‘blind spot’ should be an admission of guilt.

3 Safer design for London lorries - Lorries designed for off-road use should be taken off city streets. The best mirrors, cameras and sensors should be fitted as standard.

4 Higher standards from lorry operators - Quality-assurance schemes such as London’s Freight Operator Recognition Scheme (FORS) should be mandatory, and the police encouraged to crack down on rogue operators.

Plus: Better education for cyclists -Cyclists must be given the most accurate and up-to-date information on riding safely around lorries.

Neil will leave copies of the petition at CCH HQ for you to sign.