The Cycling Club Hackney round of this years ERRL took place on tight 3.9 mile circuit round the lanes of west Suffolk in near perfect conditions. Right from the start the race was animated with attacks coming thick and fast with the laps averaging 11 and half minutes. The rolling course with its two punchy hills made for fast racing -
"Thanks to you and everyone from CC Hackney who made it such a cracking day. Friendly, helpful and smiling, your team were superb, and the race itself was excellent. From the briefing the circuit sounded potentially sketchy , but it was absolutely fine and with its technical parcours and the short stingers, made for a good hard race." - Ossie Assem, Finchley Racing team,

Riders  Christopher Thomas of East London Velo and Ross Fawcett of Pedal Power Cycles Ipswich started to pull out a lead, which are lap on lap with Thomas taking the first prime on lap 3.

By the second prime on lap 6 again taken by Thomas their lead had stretched to a minute and a half. It was looking like they wouldn't be reeled in. The CCH riders amongst others kept trying to form breaks to bridge to the leaders but with a team member up the road East London Velo marked every attempt.


Eventually one lone rider did move off the front in the 9th lap but with two laps remaining would he have enough time to catch up?

Tom Elwood did seem to be gaining on the two leaders but still had plenty to do as he took the bell.

He not only caught them he went straight past and attacked leaving then to solo in for the victory in fine style with Thomas coming second and Fawcett third. ELV showed strongly with Tom Beasley leading up the bunch sprint for fourth with Morris Bacon of Strada Sport coming fifth followed by a CCH duo of Logan and Charlie in 6th and 7th.

Thank you to all the CCH members and friends who came out and volunteered their time. The feed back from the riders and the locals was overwhelmingly positive about the organisation - you helped make it such agreed event. Thanks must also go to Allan Loveday and his wife Susan who helped us with the HQ and parking at such short notice and stood in as caterers on the day. The catering raised £190 of which £100 is to be donated to Oncology Unit Addenbrookes Charitable Trust and £90 to Thurlow Sports Club funds which will go to refurbishment of the kitchen area. Also thanks to Tim Barlow and Thurlow estates for the us elf their yard for extra parking - this raised £45 towards the Thurlow church fund. Thanks to all the race officials , commissaires, marshals and convoy personnel without whom it couldn't happen. Finally thanks to Ian Doe and Derek Lusher from Eastern BC for all their help in getting the event on.
Full result here.
Photo galleries here.

Grace Garner timed her attack to perfection to win from a breakaway of three and take her second successive Essex Giro title in the HSBC UK  National Women's Road Series. The Wiggle High5 rider got away with four laps to go with Chanel Mason, of Storey Racing, and Ford Ecoboost's Charmaine Porter, with the trio quickly establishing a commanding lead. Their advantage, at one point up to a minute, came down to under 30 seconds with two laps of the eight kilometre circuit to ride, but a long turn from Mason on the front killed off any hope of the peloton catching the leading three. But it was Garner who got the better of her rivals in the finishing straight, launching her attack to leave Mason trailing and while Porter went with her, she could not hold on as Garner won the race for the second year in succession.

Storey Racing’s Mason, third in the opening round of the series at the Tour of the Worlds, launched an attack almost as soon as the flag had dropped, but after five minutes of chasing the peloton soon brought her back into the fold. With two laps gone and the field still all together, Mason tried once again to get away, but Elizabeth Banks’ SunSport Velo team were marshalling the front of the bunch well, aiming to defend the Tour of the Wolds winner’s Series lead. Garner, fresh from a stint racing on the UCI Women’s WorldTour with her Wiggle High5 colleagues, continued to sit in the field keeping an eye on the race. But with Hannah Larbalestier and Gabriella Nordin marshalling the front for SunSport Velo, she had little to worry about with no-one able to get away – even on the punishing climb in the final three kilometres of the circuit. 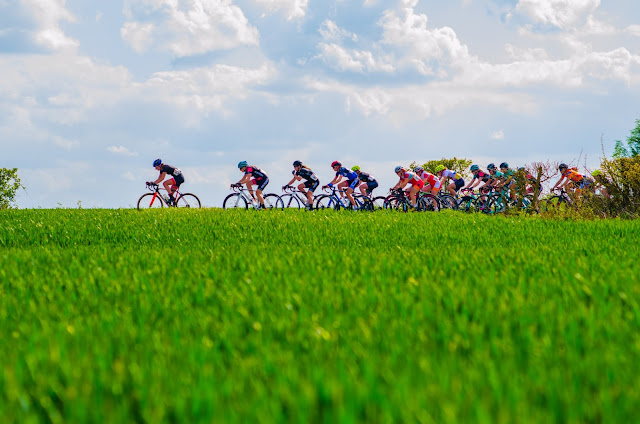 With the laps ticking away it was Ford Ecoboost’s Kelly Murphy and Team OnForm’s Sian Botteley that were the first to break clear of the peloton. But they were soon reeled back in and, as the pace was upped the bunch began to shrink with riders being spat out the back of the peloton. Banks herself did the brunt of the work to bring them back, with Garner again sitting in the wheels and conserving her energy. Ford Ecoboost were also a constant presence on the front of the field, but when the decisive move came they were powerless to stop it.

With four laps to go Mason, Porter and Garner launched their attack, with the trio soon establishing a lead on the field. SunSport Velo pegged their advantage at 15s for a while, but they could not chase forever and the break soon had a minute over the peloton. With two laps to go that advantage quickly dropped under the 30s mark, but Mason was quick to react and a long pull at the front edged it back over 45s. So with the front three away it was left between them to fight it out for the win, with all Mason’s efforts throughout the day costing her in the closing stages as Garner attacked and she could not go with her. Porter tried to bridge the gap but she didn’t have the legs either, and Garner was left to cross the line, arms aloft, for her second Essex Giro win in as many years.

Banks suffered a crash just before the decisive breakaway went clear, but made it back into the pack thanks to fine work from her teammate Liz Burrows. However, an 11th-place finish for the Tour of the Wolds winner was not enough to keep her in the overall Series lead. Mason’s attacking day not only saw her pick up the most combative rider award, but also take over the lead of the HSBC UK | National Women’s Road Series standings by 12 points from Banks – with Storey Racing also now leading the teams standings.

The 2017 HSBC UK | National Women’s Road Series continues on Saturday 22 April with the Essex Giro hosting the second round.

Elizabeth Banks (SunSport Velo) is the early series leader after getting off to the perfect start at the Tour of the Wolds and will be keen to make it two wins from two on the roads of Great Thurlow.

The National Women’s Road Series is a nine-race competition, which runs from April until August.

The first round took place in Lincolnshire as Elizabeth Banks came out on top in the Tour of the Wolds.

This weekend’s Essex Giro is round two before the race heads to the Lincoln Grand Prix in May.

June sees three races, starting with the CiCLE Classic in Leicestershire, followed by the Curlew Cup in Northumberland and the Otley Grand Prix in West Yorkshire.

The first weekend of July sees the always popular two-day Alexander Tour of the Reservoir followed by the Newton Longville Festival of Cycling Grand Prix in Buckinghamshire later that month.

The series concludes on Sunday 6 August with the Ryedale Grand Prix in North Yorkshire. Individual honours are up for grabs with an overall and under-23 champion to be crowned.

The race starts in Great Thurlow at 2.30pm, with riders set to take on 12 laps of the course over 59 miles.

Garner picked up the stage one win in Sudbury on day one before following that up with victory in the time trial on day two.

SunSport Velo’s Elizabeth Banks is the early series leader and will have her eye on back-to-back wins.

Fresh from international duty at the UCI Track Cycling World Championships in Hong Kong, Great Britain Cycling Team’s Emily Kay lines up in Team WNT colours alongside Natalie Grinczer, who was fifth at the Tour of the Wolds.

Chanel Mason, of the newly founded Storey Racing, took third in Lincolnshire and will hope to improve her standing in Great Thurlow.

Team Ford EcoBoost are always capable of providing a winner, even without 2016 champion Nikki Juniper who broke her collarbone at the Tour of the Wolds - Charmaine Porter and Jennifer Powell could provide the challenge for the team in orange and blue.

Follow the action from the National Women’s RoadSeries on our live blog from 2.15pm on Saturday, for race updates, images and social media.
Follow @BritishCycling on Twitter for updates from both events throughout the racing.


Video highlights, reports, results, images and reaction will appear on the British Cycling website.
Posted by Neil at 19:40 No comments:

New base for CC Hackney and Interlinkx CiC

Our time at Nightingale Estate & Olympus Square is just about up, we're set and ready to move on. Last week as director of ICiC I signed a legal document with Hackney Council (our main sponsor and enduring partner) for a new home for us at the Elsdale Community Centre E9. This is a long term arrangement and we will be moving to this space later on this month. Both organisations (Interlinkx CiC & CC Hackney) will accommodate and run sessions that effectively outreach the neighbourhood and serve those that would otherwise not access quality cycling in the Borough of Hackney. Delivery here will be happening as an on going commitment that is in line with our main sponsor's informed policy and the general headline view 'Hackney: a Place for Everyone'

Working from here will be a significant change for the better, we have the potential to make a positive and lasting impact at the ECC. Unlike Olympus Square, this building is not condemned for demolition; we could be here happily ever after!

I'd like to thank everyone who has helped and supported us so far (10 years) and I'm looking forward to seeing what we can do for those that like cycles and cycling from our next home.