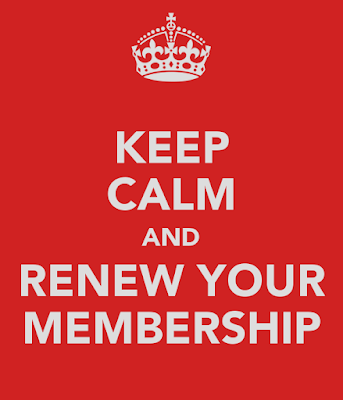 Dear existing and prospective members,
CC Hackney's 2016/17 membership subscriptions are due on or before 1st April.
Here is the link to our on-line membership page where a range of options can be found to suit. https://www.britishcycling.org.uk/club/profile/2718/cycling-club-hackney
More about CCH membership here: http://www.cyclingclubhackney.co.uk/membership.html
In April numbered membership cards will be sent out by post to the addresses supplied on-line. It's a requirement for CC Hackney members to be insured. British Cycling provides this and many more advantages within their membership offers:- https://www.britishcycling.org.uk/membership 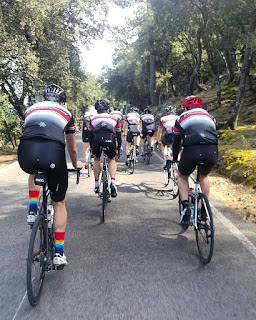 CC Hackney's adult club run and racer group have been away pre-season training in Mallorca. They're looking for form and fitness after a solid block in the warm sunshine.
Good luck lads, in the races coming up soon. 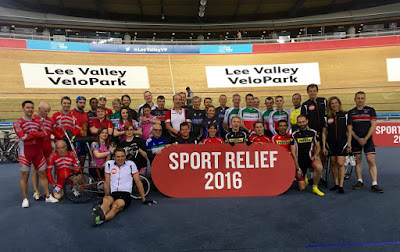 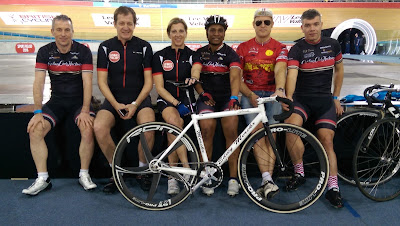 Twelve CCH delegates attended today's Go-Ride conference down in Bexleyheath. Nine of our youth riders have signed up to the British Cycling Young Volunteers program. So look out for them helping out at training and at our events. We also recieved a framed certificate of our Clubmark status - renewed recently thanks to all the hard work put in by Harry, Keir and Giuliana amongst others.
Euan also received a BC go-ride jersey  for being the most attentive young volunteer of the day - all the lovely food on offer didn't distract him from the days learning...
Posted by Neil at 17:36 No comments:

The View from Track Centre


Having spent all of last week helping out at the Track World Championships at Lea Valley Velodrome I thought I might share the view from Track centre. Unfortunately volunteers are not allowed to stand around snap chatting with the great and the good so its more of an insight and I'm sure you've all been there and ridden round anyway - however some other kind bodies took some photos so here they are.

My main task for the week was as one of the starting gate operators. The starting gates are the red frames you see getting dragged in and out when there are pursuits, team sprints and most timed track events. They are attached by cable to the timing devices which release the pads holding the riders back wheel in place once the countdown reaches zero. Weighing around 70kg they take some moving even if they do have wheels. Getting them up onto the track and into the correct position takes a bit get used to.

Once the rider's helper has presented the bike a few hopefully quick adjustments take place to secure its wheel and seat post . Most of the time it goes well but there are a couple of team coaches that are always picky about the set up and that puts pressure on the operators to act quickly. (Australia and GB if you must know - I suppose its the attention to detail that helps them win). The pressure is due to everything being on a very tight schedule for the live television feed. Once the bike is set and the rider is on the bike the countdown begins and the gate operator stands on the rear to stop the rider dragging the gate away if they start too early. In the men's kilo event two people stand on the back as those big sprinters would probably drag it all the way round with just one guy on the back.

Once the rider has set off the gate has to be taking off the track and out of the way as soon as can be especially if its the team sprints - those guys cover half a lap fairly quickly... Then its a matter of repeat until all the heats are done. Those of you who were there know how hot it is during championships inside the velodrome so we were consuming litres of water in between getting the gate out and in.

When we weren't needed on the gates there was time to look around at all the amazing kit getting used and watch the mechanics set up the bikes. I reckon the mechanics must have been on 20 hour shifts each day and they never stop working on the bikes. the Australian pen was the closest to where I was normally stood and I liked the look of their gold plated sprockets - reduced resistance on the chain. In the Canadian pen they had a turbo rig built out of an old steel bike frame with no rear wheel - just three chain rings one on each side of the cranks and another on the front wheel - it looked mad but it must work as they had a pretty good week. The german TT bikes were pretty amazing things to look at too.

For me the other top bits of kit were the Azerbaijani team manager's snakeskin waistcoat - truly one of a kind - and a hand knitted flag in the Russian's pen - could be used as a flag or a cosy what's not to like...
By the end of the week I was pretty knackered, GB seemed to have won lots of rainbow jerseys and everyone seemed pretty happy. So why volunteer - just ask fellow volunteer and CCH club mate Matt Hallet who was also helping out track side. He performed an important task for Jason Kenny just after he won Gold in the men's sprint - it involved rather quickly finding a bin and removing the lid....

Thanks to Martin and Geoff for the pics.

Sign up is with RiderHQ
Refunds will only be made if a qualified replacement rider is found.
Please arrive 30m before the sessions are due to start.

LINK TO
RiderHQ
********** IMPORTANT **********
These sessions are for those aged 16 and over.
All riders need to have passed their Lee Valley Velopark Level 4 accreditation and are required to state that they are L4 qualified on their entry form. Participants must also be full or associate (2nd claim) members of CC Hackney.
Posted by MCSG at 20:40 No comments: