There will be at least four events between now and the end of February all on Wednesdays. The opening rounds are:
19.11.08
White Hart (500m event)
1 Mile End Rd
E1 4TP 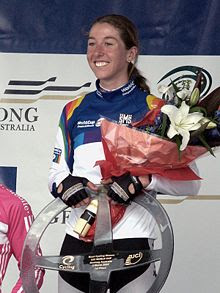 'Beijing really showed women's cycling for what it is, the women's race was just as exciting as the men's, so from an entertainment point of view they're equal. Then at the world championships a lot of people said the road race finale was one of the most exciting races there ever was, men or women.'

Nicole Cooke puts the case for womens road racing in an interview in the Observer.

There is also an interesting interview with the winner of four stages in the Tour de France Mark Cavendish about why he felt let down by the Olympic team.
Posted by Stuart at 22:53 No comments: