The young cyclists of Hackney continue to show strength in depth and determination as the borough's cycling team came top once again at the London Youth Games cycling competition.

The team made it three wins in a row - taking the wet conditions at Lea Valley Velopark in their stride. This no easy thing as every year riders move up and out of the age groupings meaning new riders have to come in and take up the baton.
Tom Bardill, Jake Evans and Ethan Rowell rode in the under16s male Time Trial over 4 laps of the Lea Valley circuit - probably getting the worst of the weather. The boys placed 5th , 6th and 11th respectively giving Hackney a solid start to the competition. In fact Tom and Jake were separated by only 6-100ths of a second.

The team on the day was supported by the rest of the squad members - the reserves were ready to step up in case someone felt like imitating Froomey - thankfully no one did.

In the under 16 female Time Trial we had sisters Lorna and Evelyn Dumbleton alongside Anoushka Minale. Lorna finished 20th , Evelyn seventh and Anoushka took first place with a great time - the only female below 10 minutes. Hackney were definitely up there at this point.
In the afternoon it was the younger riders turn and in the under 12 boys Freddy Augsburger claimed third spot, whilst Joseph Krolick came 27th and Jimme Brotherhood 33rd.
In the under 12 girls TT Laila Grace MacKenzie-Breary took 6th place with Ishanna Cannell 11th and Charlie Greensides 12th. With only the road races to come it was touch and go as to which Borough would win.
In the under 16 boys 12 lap race the boys missed the break and Tom finished 11th and Jake 16th.
Whilst in the girls Anoushka came 4th and Evelyn 8th all of which meant under the arcane points scoring for the LYG Hackney retained the Eileen Grey Cup for the third year on the bounce and are overall winners for an unprecedented 6th time.

Well done to all the riders - team, squad and others who helped out and thanks to the support team of coaches and parents who made it happen.

Full gallery of photos here by Sean Pollock.
More photos to come.
Posted by Neil at 09:40 No comments: 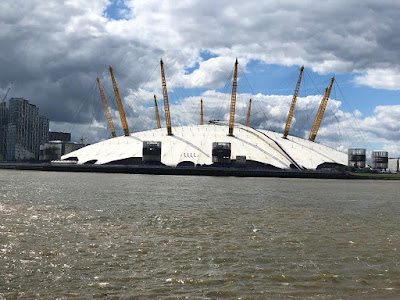 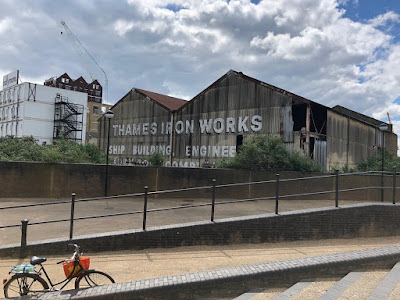 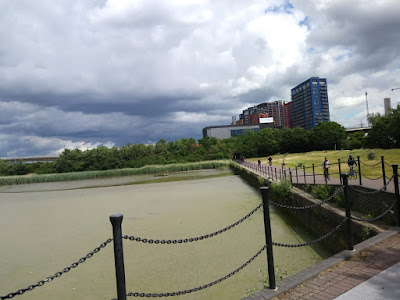 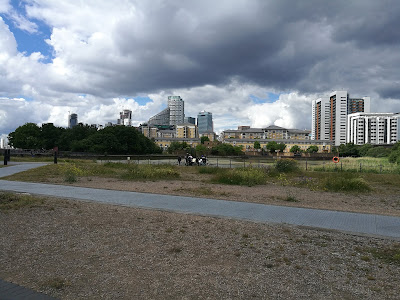 The latest edition of Hackney Today carries a special feature in it about CCH/ARDP's commitment to developing cycling as a sport for all, especially here in Hackney. 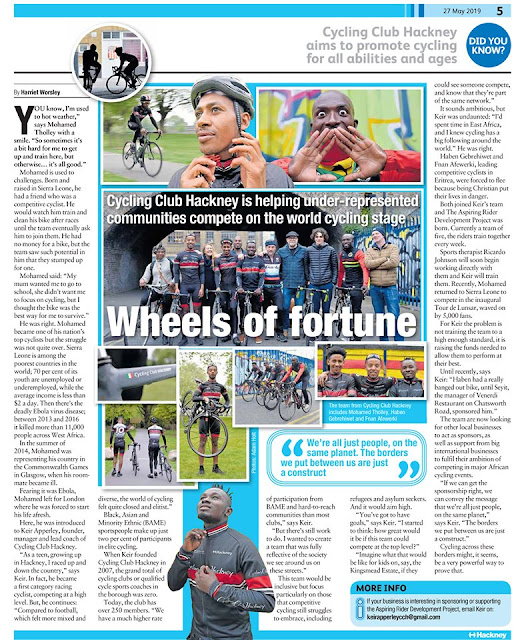 
Apperley has worked in grassroots cycling for over 10 years, coaching the likes of Tao Geoghegan-Hart and Alex Peters, both Hackney riders who have gone on to ride for Team Sky.
Geoghegan-Hart, 24, yesterday celebrated his first professional victory in the opening stage of the Tour of the Alps in Austria, as part of a team that includes four-time Tour de France winner Chris Froome.
Apperley added: “Our riders need to know that there are possibilities to go to the next levels and even all the way to the top, breaking through any false ceilings there may be along the way.
“ARDP staff and coaches are on hand to help them develop their confidence, language and communication skills.”
Haben Gebrehiwet, who came to the UK from Eritrea, says his new bike is transformative: “It means a lot to me. I want to say thank you to the sponsorship project, to Venerdi and to Keir as well, for all the hard work.
“With this new bike, I will try to race in long races, more than 100 kilometres. I wish one day to be a professional cyclist with their help.”
Fellow ARDP member Okubit Tereke, also from Eritrea, received a race bike too.
Both bikes have been rebranded with Venerdi logos, after the restaurant got involved to help finance the purchases and resprays.
Cycling Club Hackney is now hoping to start an ARDP refugee cycling team.
If you want to get involved in the club, Apperley runs outreach sessions on Wednesdays and Saturdays at Kingsmead Housing Estate, as part of the Concorde Bike Club.
The club is also running a Spring series of races at Lee Valley Velopark – the next is on 27 April, followed by one on 8 June.
It is also preparing for its 12th annual ‘big ride out’ on Sunday 5 May.
For more information, head to cyclingclubhackney.co.uk
Posted by MCSG at 09:34 No comments: