THE 6TH ROUND CHELMSFORD

THE 6TH ROUND CHELMSFORD
- Our annual guided 160km ride round the lanes of Essex will take place on this Sunday the 5th May 2013.
A great leg stretcher for those who want to put the miles in -  we meet at the Lea Valley Ice Rink after 8am and leave at 8.30am and the ride settles in to groups of differing speed once we pass High Beech, meeting up for lunch at the White Swan in Bicknacre. Route sheets are handed out on the day.

Click here for the route or find the course via our downloads page here. 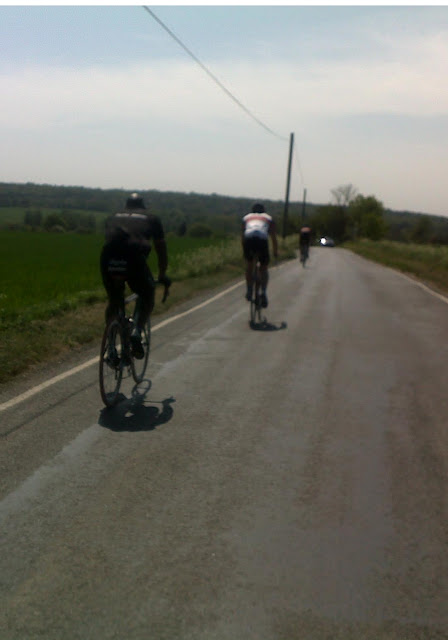 Riders heading towards the 1500m North Hill turning point during the 3rd edition.

Tao - not tired of winning big races yet

Tao Geoghagen Hart has won another significant race in a club shirt - details and pictures can be found here
And in his own words here: http://taogeogheganhart.blogspot.co.uk/ 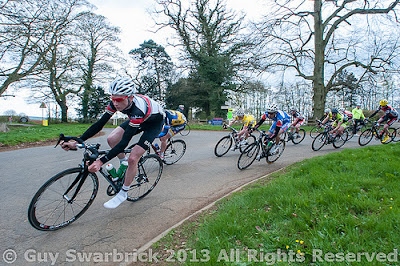 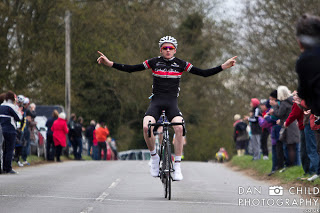 CCH"s annual membership today was a great success with close to hundred members renewing or joining for the first time Hackney's best cycling club. Alongside membership renewal there was a bike jumble with lots of bargains on display and a cake stall groaning under the weight of delicious cakes. Also on sale were the new CCH cycle caps supplied by Rapha which were selling quicker than the hot cakes at £5 for youth members, £12.50 for senior members and £17.50 for non-members. There are still some of the most sought after caps in East london for sale at the club. All this helped raise a substantial sum for the club which will help with our prize funds for our upcoming race events amongst other things. Thanks to all members who helped today and all who came along to support.

If you couldn't get in today to renew your membership then Mick will be at the club again next Saturday to take dues - not this wednesday as previously advertised. Following this we will be making an online membership payment option availible - however you'll still need to pop into Olympus Square to pick up your membership card. 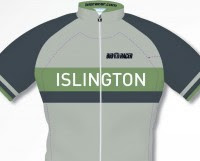 Our open track event is not so many laps away now - recruiting volunteers/good hands for this and our open Road Race will be taking place on Saturday April 27th during our members day (membership cards/fees) and bike jumble sale.
This being held at CCH HQ - 6 Olympus Square Nightingale Estate Hackney London E5 8PL - 10am - 2pm 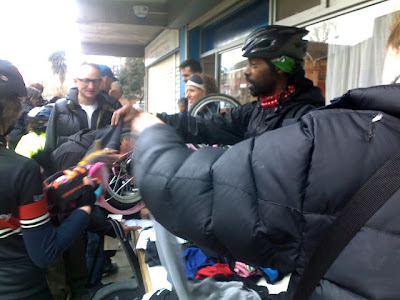 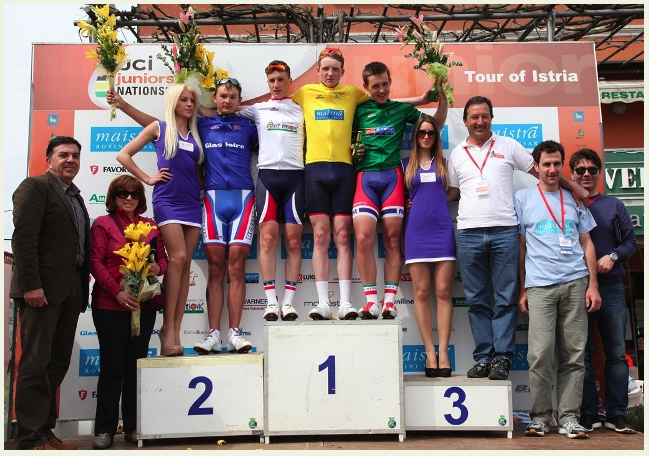 Just in time to celebrate the CCH blog going over 100,000 hits Tao pulled out the goods and delivered a first International tour win for GB at Junior level in the UCI Nations Cup Juniors event - the Tour of Istria. Tao picked up yellow by winning a bunch sprint on stage 2 then acted like an old head finishing in the main bunch on stage 3 to take the general classification, yellow jersey and red jersey for the points. Looks like the Croatian sun was shining down on Hackney's finest in what is looking to be a memorable season for him. Whoever said redheads don't suit yellow - it doesn't look that way to me. 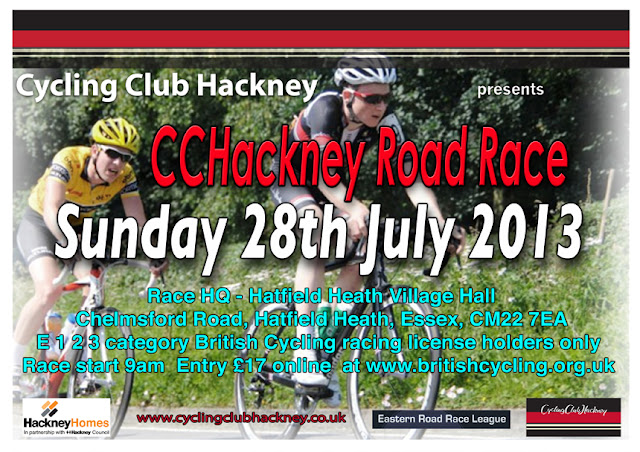 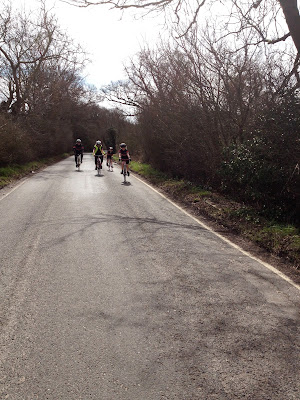 CCH annual road race is getting closer so we took advantage of the fine weather last sunday to check out the course up at Hatfield Heath and conduct a pre race risk assesment. The 9.9 mile ERRL approved course is set up for fast paced racing with only a few small climbs but some pretty narrow sections - not least coming up to the finish so it should make for good racing. The club needs all it smemebrs to come together and help out at our events to make them safe and succesfull. I'll have a sheet at the upcoming members day and at the agm where you can sign up for a task.

CC Hackney's new website is up and running again - have a look here: 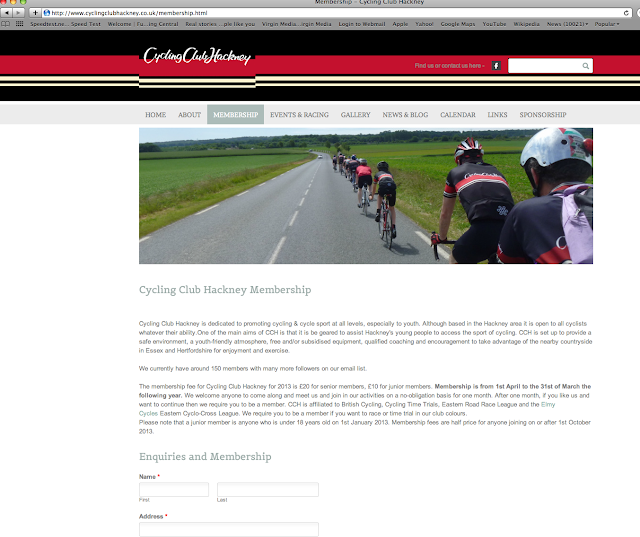 Thanks and cheers for this to Trevor (the book) Parsons, Neil (Iron Brew) Irons and Giuliana (tiffosi) Molinari.

The latest Superclub session took place last Sunday 7th at Newport Velodrome in Wales. The superclub is a cluster of British Cycling eastern region clubs aimed at getting more of our young riders on to the track and upskilling them for racing. CCH turned up with the largest contingent for this session with seven riders, two coaches and three helpers traveling by minibus. After being split into groups the riders took it turns of 20 -30 minutes to ride the track practising various techniques, as any of them will tell you Newport isn't the sort of track where you can travel round slowly as your back wheel will slide out from under you, so a fair pace has to be kept up throughout. After four hours of this Aminur, Isaac, Logan, Louis, Ned, Shaquille and Tyrell were getting hungry and tired but were buzzing with the efforts they had produced especially in the practise races.
The superclub sessions are continuing throughout the summer up at Welwyn velodrome, all riders previously nominated will be nominated automatically. Riders new to the track are also welcome to attend - priority goes to U16/U14 age groups but U12 can apply too - there is a sheet up in the club whre they can put there name down. Dates and details below - 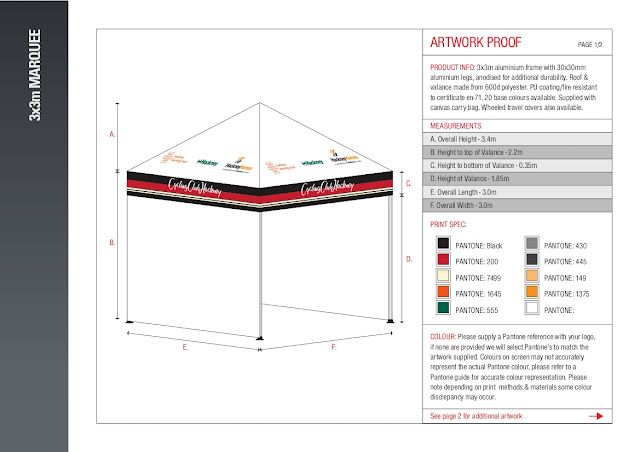 Hackney Council Leisure & Green Spaces have approved CC Hackney's design and most importantly the budget to enable the production of our first official marquee.
Sports Development Coordinator Lynn Humphrey has seen to it that our club receives this asset in time for our summer programme of events; many thanks going out to Lynn and the department - yay from CC Hackney:)

Summer programme...In 2013 CCH will be delivering the following:

07/04/13 - Roubaix Velodrome
Tao has made it to the podium in the junior version of the world's toughest one day cycle race; Paris Roubaix (also known as l'Enfer du Nord)
Riding for British Cycling's GB squad, Tao's impressive result in northern France will go some way to healing the disappointment he must have felt after crashing out while in a good position in last years edition of this classic race.
In my experience 3rd place feels better than 2nd which is often so near but so far - from winning.

Well done Mr T great show - clearly you are right in there at world level! 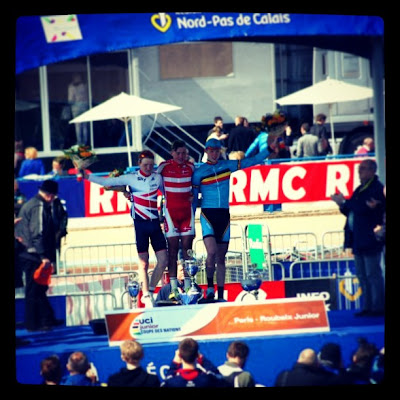 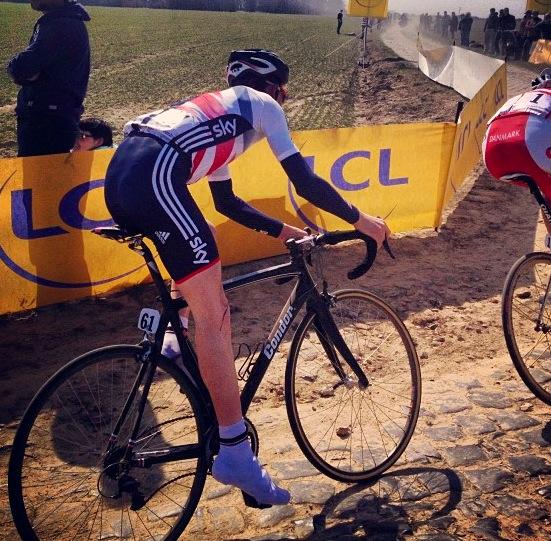 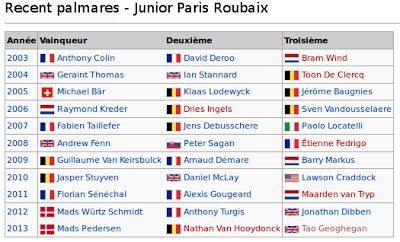 For British Cycling's report and results go here.
Posted by Keir at 16:06 1 comment:

Today the late Alan Rosner's memory was honoured by the inaugural Memorial Meeting at The Redbridge Cycle Centre. A well organised programme of races for all categories and ages went ahead. Many of the riders and supporters (myself included) have memories of Alan's commitment and passion for the sport he loved.
A new bench with a plaque bearing his name was unveiled near the summit of the Hogenberg after the E123 race finished. This race was notable because two of Hackney's finest cyclists Alex Peters (Genisis Maddison) and his old school (Stoke Newington) mate Tao Geoghegan Hart (CC Hackney) were back together again giving it ten off the front and creating a buzz for the spectators. 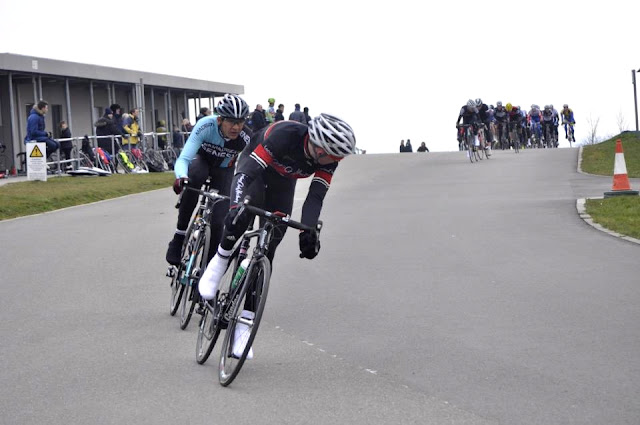 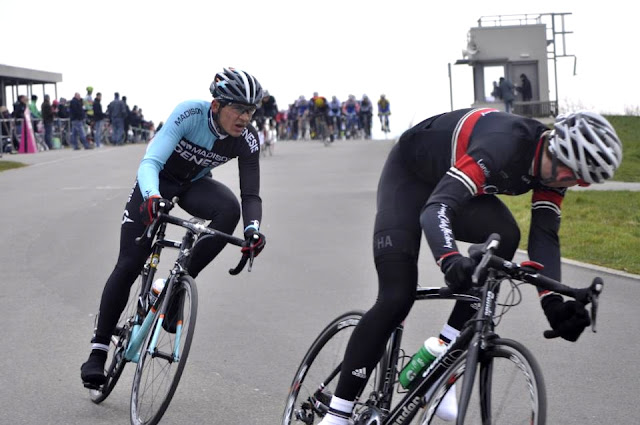