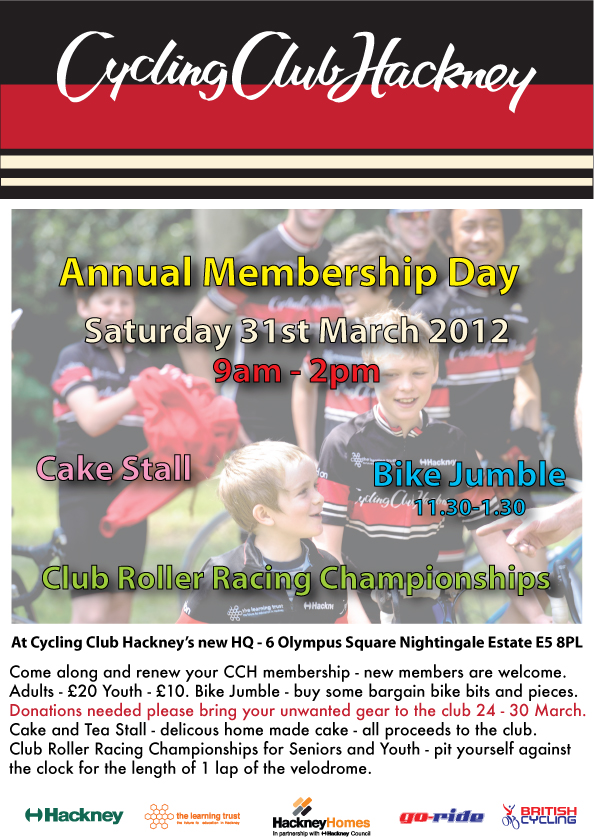 The CCH annual membership day is on Saturday the 31st of March from 9 am-2pm, please come along and renew your membership or take up new membership. £20 for adults/£10 for youths. In addition to recieving your new membership card we will also be running a Bike Jumble from 11.30 - 1.30 and a cake stall as a fundraiser. If you have bikes/ bike bits/memorabilia/ cycle clothing/ tools / accessories you can donate then bring them along to the club beforehand. We also need people to bake cakes and volunteers to help on the day.

In addition to this we will be running the innaugral Club Roller Racing Championships for Adults and Youth - pit yourself against the clock for 250m - or one lap of the Olympic Velodrome. 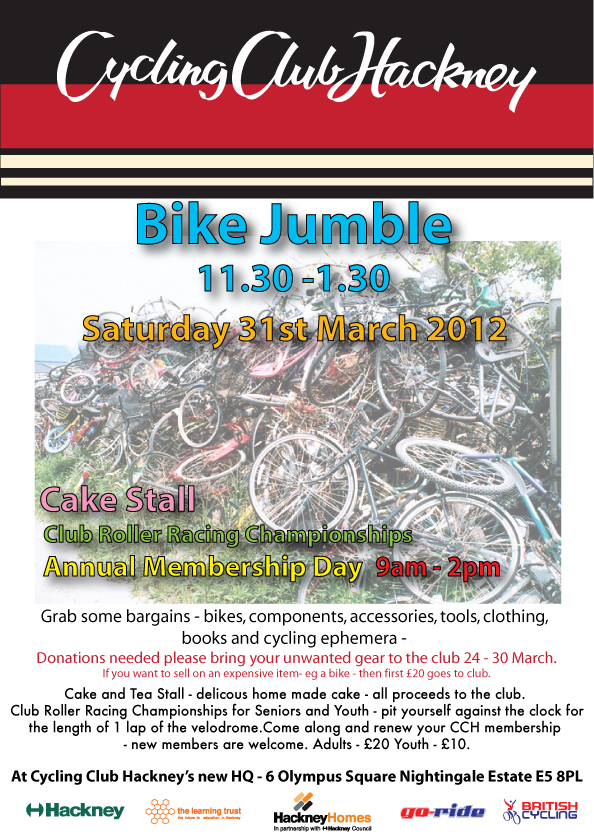 CCH riders were racing in a number of different events last weekend with some notable results. top of the list has to be Tao's win in the Cadence Junior Road Race in Brecon, Wales.

The 68 mile race was ridden at a fast pace with the steep finishing hill part of the circuit splitting up the riders into groups with the leaders being two minutes up the road. Tao clawed his way back up to the leaders and left them behind on the final circuit to win by 27 seconds. A big margin and a big win for Tao. Full report here.

On Saturday over at Hillingdon the Beyond Spring Crits series started off well for CCH with Justin claiming fourth place in the Cat4 race. In the U12 boys Logan finished second with Isaac 5th and Bede 6th. In the U14s Mostyn came 8th and Ned 10th. Full results here.

Sunday morning saw the latest round of the ERRL with the Braintree Velo Spring Road Race being held on the same course CCH use at Bulmer. John and Sophie both had their first outing in a road race with John finishing a creditable 24th. Report to follow.
Posted by Neil at 19:55 No comments:

See flyer and blog for details... 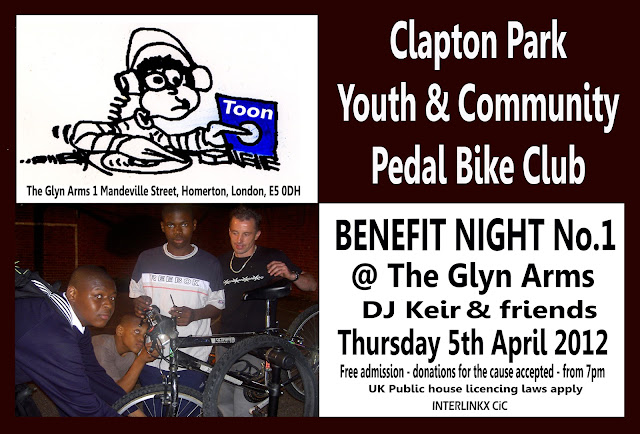 A brief history of bike clubing on Nightingale Estate

A very big thank you to Hackney Homes for their continued support of Interlinkx CiC and CC Hackney. And also especially to all of the staff, volunteers and helpers involved in making the HQ move from No.1 to No. 6 Olympus Square - Ace!
Before arriving at No1 Olympus Square and at our plush new space, for 16 months between 2007 - 08 Interlinkx CiC were responsible for delivering the popular Saturday morning bike club; a youth and community cycle maintenance session. These classes were staffed by local resident and teacher Pia Russel and I. We worked out of a derelict garage in the open yard behind Olympus Square, meeting youth cyclists needs...but even before those days... 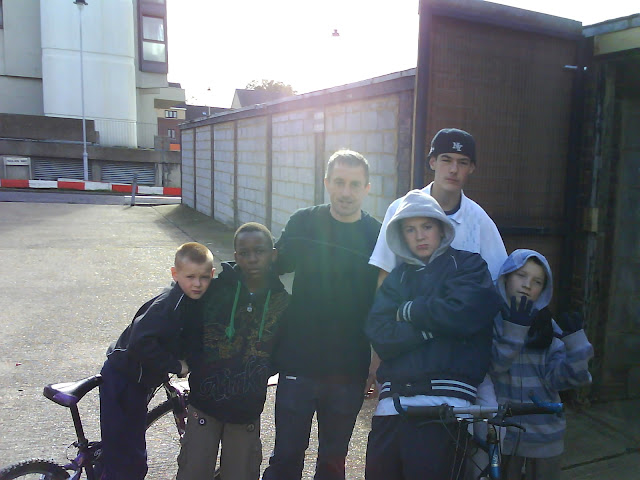 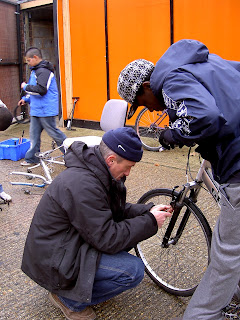 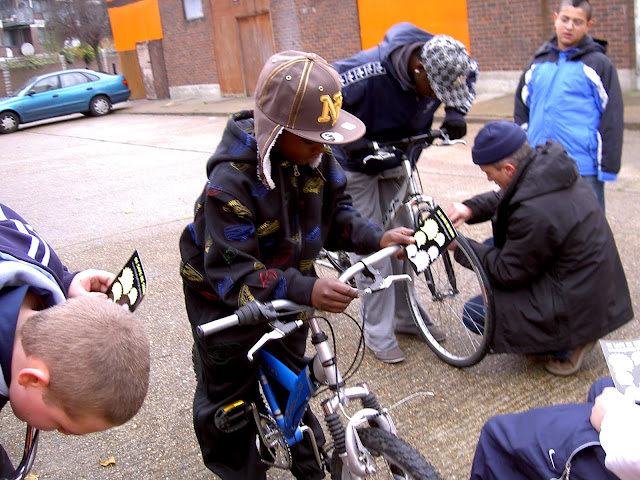 CCH has a new HQ as of today - we've moved 5 doors down to number 6. Hackney Homes have been brilliant in their efforts to support us and have housed us in what must be the poshest looking club house around.

Gary and Andy packed up no'1 on wednesday in ready for the big move today. Keir and Giuliana had done quite a bit of negotiating to ensure the new space came up to spec and today along with Prosper, Liz, Gary, Kate and myself the big move took place very smoothly. Much thanks to the team and Hackney Homes and their contractors for doing a great job. Let's show them it was all worth it and get out there and get some great results.

Last week saw no fewer than 26 of CCH youth  riders turn up in horrible conditions to race in the final round of LVYCC winter series at Hoghill. Well done to all of them - many of them racing for the first time - for giving it a go.


First up in the Under 8s we had Stan- 5th, Milo - 12th, Oliver 13th and Robbie 16th. Stan played out a very tactical race to ensure his fourth place in the series only to find out the rider he'd been marking was the wrong one - the rider he'd meant to mark had been dropped already.


The Under 14s and 16s had the worst of the weather in the longest race which seemed to produce a puncture or two every lap. Well done to them all for finishing especially Joe and Aminur in their first outing at U14 level. Alex came 8th in the U16s whilst in the U14s Mostyn - 10th, Ned - 12th, Jack - 19th,
Joe - 23rd and Aminur 24th.

Full results here.
Posted by Neil at 13:56 No comments:

The CCH annual membership day is on Saturday the 31st of March from 9 am-2pm, please come along and renew your membership or take up new membership. £20 for adults/£10 for youths. In addition to recieving your new membership card we will also be running a Bike Jumble from 11.30 - 1.30 and a cake stall as a fundraiser. If you have bikes/ bike bits/memorabilia/ cycle clothing/ tools / accessories you can donate then bring them along to the club beforehand. We also need people to bake cakes and volunteers to help on the day.

In addition to this we will be running the innaugral Club Roller Racing Championships for Adults and Youth - pit yourself against the clock for 250m - or one lap of the Olympic Velodrome. 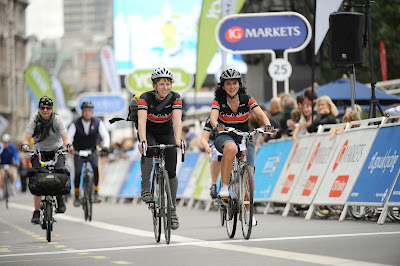 Are you new to racing or group riding? Are you considering joining the London Women's Cycle Racing league and want to know what it's like? Or are you a seasoned racer who would like to get to know some of your fellow racers better or fancies a coffee and a chat with some bike riding in between?

If so, then why not come along to one of our pre-season Meet and Greet rides?

Meet and Greet rides are open to sporty women of all profiles - from keen cyclists to rowers and triathletes with or without a club.

Come and join other women cyclists on the rides hosted by clubs in different parts of London and the South East, where you can find out more about women's cycling from experienced club cyclists.

About 45 miles out to Epping and the countryside beyond, average pace 14-15 mph.
Mostly flat with a couple of hills.
Relax with a cup of tea, cake and a chat at the High Beach tea hut before the return journey.
Get back to Hackney before midday.
Please let Isobel know if you are coming: 0773 828 1703.
http://www.londonwomenscycleracing.com/2012/02/meet-and-greet-rides-with-local-clubs.html
Posted by Neil at 09:29 2 comments:

Tao up for the Junior Paris-Roubaix

The Great Britain team for the Junior Paris-Roubaix, which takes place on the 8 April, has been confirmed.
The event forms part of the UCI Juniors Nations’ Cup, with Jonathan Dibben finishing fourth in last year’s race. Previous victories for GB include Geraint Thomas in 2004 whilst Andy Fenn won in 2009.
ODP Endurance Coach Matt Winston commented: “We travel to Paris-Roubaix looking to try and build on the fourth place Jonathan Dibben achieved last year.


“Four of the riders were in the team last year and two riders are first year juniors who will travel to the race for experience. The team are looking to develop and gain experience on the road and the track throughout the season and the Nations Cup races are a valuable place to do this.”
Great Britain team for Junior Paris-Roubaix
Jonathan Dibben
Tao Geoghegan Hart
Oliver Wood
Chris Latham
Harry Tanfield
Sam Lowe
- Source - BC.org.uk
Let's wish them all well and that they put on a really good show in what's becoming a great year for British cycling.
Posted by Neil at 09:18 No comments:

You will be qualifying in GROUP 9 and will need to be ready to register at 5pm, to ensure your track side for 5:30pm.
So please ensure you arrive on time to allow us to register you and for your bike check.
If you are late you run the risk of being disqualified.

We encourage you to turn up on time, register and support other competitors.
Red Bull Mini Drome event details

Event format:
The qualifying round is broken into 14 groups of 15 riders. Each competitor will have 6 practise laps, before going straight in to one timed run over 10 laps. The fastest 50 riders over 10 laps will progress through to the finals on Sunday 18th, which will be a single pursuit knockout race format, commencing at from 3:00pm.


Red Bull Mini Drome track rules:
• Fixed Gear Bikes only
• No Gearing – Keep it small or you’ll ride off the wall
• No quick release. Bolts only
• Helmets must be worn
• All riders must sign a Red Bull competitor disclaimer, print and fill this in before hand and bring along with you to ensure your space!


Thanks look forward to seeing you on Saturday!

The CC Hackney away supporters club coaches will be leaving from HQ at....
...good luck Loafy, coaching tip - turn left at the end of each straight :)
Posted by Keir at 16:18 No comments:

CCH on Behind the Barriers

Check out CCH on the final episode of this season's Behind the Barriers here with Jeremy Powers.
Posted by Neil at 17:51 No comments:

Saturday at the magic Homes Crits at Hillingdon saw two CCH riders on the podium in the U12s- with Isaac Costley coming 2nd and Bede Geoghan-Hart 3rd. Theo Modell from ELV was 4th.
Good racing in challenging conditions sharing the circuit with U16s and U14s and no bell for their last lap - so all did well to count theirlaps so that they could race for the finish. Which is just as well -both Anna and I thought they still had another lap to go!

Great stuff from the Youth squad with five riders getting BC points on the board early season.
Sunday saw the start of this seasons Eastern Road Race League with the Crest Road Race spinning round the Wendens Ambo course eight times in what can only be described as horrible conditions. For me standing marshalling a cross roads in the middle of nowhere it was horrible but I can only begin to imagine how it felt for CCH riders James Fairbank and Ben Brown. James managed to get into an early ten man break that became nine then finally seven where he claimed a great fifth place to put hackney in the points. Hats off to both them for finishing the race when when so many others didn't - an attrition rate of 2 out of 3 falling away...Report, photo and results here.


CCH had a strong presence at the second Hog Hill youth race of the season with 18 riders competing across the age groups. There was lots of anticipation for this event after Winter training and everyone was raring to go. One contingent set off to go by bike and train, but were turned away from the station at Leyton with no trains running! Harry's iPhone and some determined riding got them there in time to race. It was probably the longest 'warm-up' of the day, but both youth riders (Kai and Sam) rode great races afterwards.

There were some spirited performances on the track from all who raced. It was inspiring to see so many CCH riders working together and improving their performance from last year. Special mention for Logan who came 3rd in his class in a very competitive race.

It's all looking good for this year - bring it on...


Full results here with some funny name spellings and mis-placings -
CCH Juniors - remember to print your name so it can be read when signing on and write down what club you ride for.