Saturday training was interrupted today for the CCH Youth Hill Climb Championship on the south hill at Springfield park. Seeing as how the course record of 24.3 seconds had stood for three years it was hoped that it would be bettered today - and it was smashed by four riders with a few others coming very close.

Thirty one riders battled it out with the gradient - over 20 percent in some spots - and they all did very well. Shiva went off first setting a time of 36.2 seconds which leaves her as under 14s girl champion for 2013. Kai followed and set a blistering pace of 25.1 seconds that confused the time keeper. Grace finished on 29.9 seconds meaning she's the girls under 12s 2013 champion. The record finally tumbled when Jake flew up the hill in 22.3 seconds - enough to make him champion of the Under 14 boys - but would his new record last?

Sam equalled the time of Kai and so we have joint champions in the under 12 boys. William finished on 34.6 seconds making him the champion of the closely contested Under 10 boys category, whilst Serafino set a fine time of 41.7 seconds to be the Under 8 boys champion.

With three riders left it was Shaquilles turn to let fly but he finished at 22.8 inside the old record but still behind Jake. Reece came next again beating the old record with 24.3 giving him third place in the under 14s. It was all looking good for Jake then the last rider on the hill - Aminur set off and floated past in a new course record of 21.3 seconds. I'm already looking forward to next year and seeing if that record will be beaten.

Tour de France coming past our doors in East London?


After two stages in Yorkshire the Tour de France will be coming back to London in 2014 via the Epping road and the High Beach cafe, past Hackney Downs on the way to the Mall - yes? No? 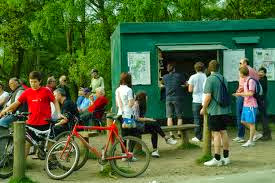 We'll find out for sure this Wednesday

That the 101st running of cycling's greatest race will start in Yorkshire is already known but the complete route of the 2014 event will be revealed on Wednesday at the Palais des Congrès in Paris. The first three stages to Harrogate, Sheffield and London offer British cycling fans a chance to cheer on the defending champion, Chris Froome, who along with fellow Briton Mark Cavendish will be in attendance to see where the race will twist and turn over the following 18 days. A live video stream of the presentation ceremony can be seen at letour.fr. 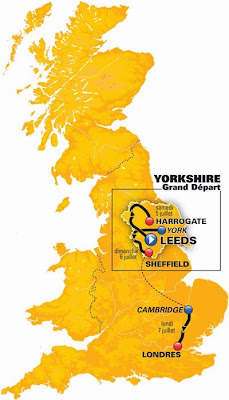 Read the preceding report on this blog by Mike on his unusual way of tackling the Three Peaks cyclocross race last weekend.