Events for next year

Thanks to everybody for an interesting and productive meeting.
(CCH committee meeting 23/10/08)

Some dates for next year, so far we have discussed, earmarked and nailed: 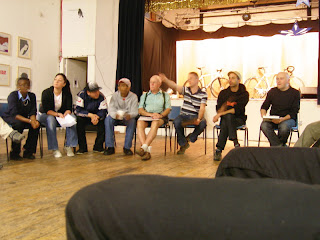 Thanks to all of the 30 or so members and supporters who turned up at our first AGM, held on Thursday 25th September. The enthusiasm for the club was clear to see in everyone who turned up, but it was particularly encouraging that about half of the attendees were young people under 18.

After giving people a chance to meet and greet, the first business of the evening was elections. Stuart Dennison will serve as club chair, taking over from myself (phew!), and Dan Batchelor kindly volunteered to be treasurer, while Keir Apperley remains as secretary. Meanwhile we have three volunteers to be youth representatives: Adebisi Alakan, Teo Geoghegan-Hart and Ryan Tran.

We went on to talk about what we've achieved in our first year of existence as a club, and about our hopes for the year ahead, including exciting plans for twinning with clubs abroad, and for trips to places as glamorous as the Alps and even Newport :)

You can read the full minutes of the meeting here in PDF. You might also be interested to read our esteemed secretary's report on our first year.

Special thanks to Core Arts for the venue and Mother Earth for providing tasty snacks at cost price.
Posted by trevorparsons at 00:18 No comments: