Sunday morning came cold, grey and windy and after the pre kit order session a group of twelve riders both CCH regulars and newcomers set off from club HQ and headed West to check out a few Surrey hills including the much talked about Box Hill due to feature (several times) in the 2012 Olympic Road Race. After an early cold shower and the loss of Tony due to a mechanical issue (and some rather spurious mechanical assistance by yours truly - sorry Tony) eleven riders continued on. The wind slowly dropped and the sun came out to play making for some great riding. After the stop start of the city the group settled into a comfortable pace as they headed out through Richmond Park and Kingston-Upon-Thames, past Sandown race course, over Esher Common and onto the back lanes of Surrey past Cobham.

At around mile 40 the group hit Staple Hill the first of three challenging climbs. At 610 ft and just under two miles this was enough to break the group up and at the top Daniels emergency stop due to a jammed cleat gave John (who was right behind him) the opportunity for a lay down on the verge! Once John had stopped messing around snoozing in the ditch and we had regrouped we pushed on deeper into the lovely woods and hills and after a long fast downhill and a tight hairpin found ourselves on Dunley Hill, the second of the days challenges and  a short sharp shock of a hill rising up to 650 ft. After a quick breather and regroup we headed on over Ranmore Common and bombed down Ranmore Hill into Westhumble Village before the last of the days challenges the zig zag of Box Hill climbing up to 680 ft with spectacular views over the valleys below.

At the top we found the National trust Cafe in a state of upheaval as work has already commenced in preparation for next years event so after a brief stop and refuel on cake, pastys and chili sausage roll that both John and I were to rue ever eating (but that's another story all together!) we set off for home. After the second puncture of the day was swiftly fixed by a trusty Anglo-Italian-Japanese trio  the pace was raised and after the Surrey Hills the way home almost felt downhill all the way back into London. We were soon once again back in Richmond Park and then heading home to Hackney. Total distance 85 miles, elevation gain 3500 ft, average speed 15mph, not bad for a Sunday club ride though we suspect that come 2012 the pro's may go a little further and a little faster. Well done and thanks to everyone for a great day, Isobel, Shaalan, Alex, John, Tony, Rachael, Daichi, Terry, Daniel, Gareth, Stefano, and Derek (who after navigating all the way there and back got lost in Hackney!).


P.s. If you fancy checking out a few Surrey Hills Derek will be leading out another Box Hill group ride Sunday 18/12/11 and monthly until Spring 2012. There will also be the opportunity to do a more challenging six hills at some point over Christmas. More information to come here and via the CCH Facebook page soon.-- Derek Mullan


Meanwhile the Wednesday night cross training seems to be paying off as CCH riders move up the leader board in the latest round of the London Cross League. The 10th round of the Mosquito London and South East Cyclo Cross League was held at the very picturesque but extremely gnarly Penshurst Off Road Centre on Sunday November 27 promoted by Addiscombe CC. This cross season has been all about the heat - far too much of it for a winter sport... However last sunday we finally saw some mud. The twisting course wound its way down a slippery steep hill into the valley then climbed its way back up the start, clearly this was no race for a lack of concentration - check out the video here at Cross Crazy.


Logan went off first in the U12's and the shorter course was no less demanding than the seniors'.

Bart (Junior) Harry and Neil (vets) joined the 104 other starters in the seniors race. Six times we had to climb back up the hill into the sun making us wonder if we'd climbed further than our teammates over at nearby Boxhill. Full report and results here - Bart's is wrong he finished just in front of me. It's the Eastern and South Eastern Regional Championships next weekend at Welwyn - the bikes should just about be clean by then - bring it on...
Posted by Neil at 17:36 No comments: 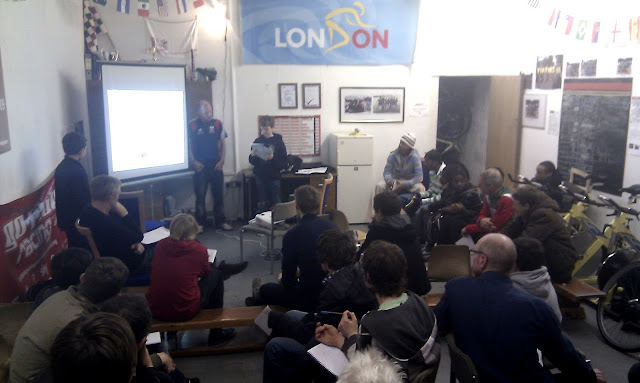 Last Thursday evening British Cycling's eastern region coach Rob Sharman delivered a fine talk entitled 'Pathways into Racing' that was well attended by CC Hackney members and also guests from East London Velo. Thanks and praise are due to the organisers and especially Rob as he had traveled all the way down from Derby to be with us.
The session was targeted at youth riders but was useful for all. We were informed about the many racing opportunities and locations in the and around the region as well as a simple and effective five day weekly training programme for young riders, beginners and anyone else pushed for time.

In short there is plenty of racing near by and it's all about preparation and speed :)

To follow this, the first of our 'CCH Coaching Club' open workshops (CCHCC) is set for Monday 5th December from 6.30pm at 1 Olympus Sq E5 0QJ. This session is open to all members who want to improve their training to become racing cyclists or raise their standard if they are racing already. Target setting, knowledge sharing and coaching the British Cycling Level 3 way will be the main areas of work. 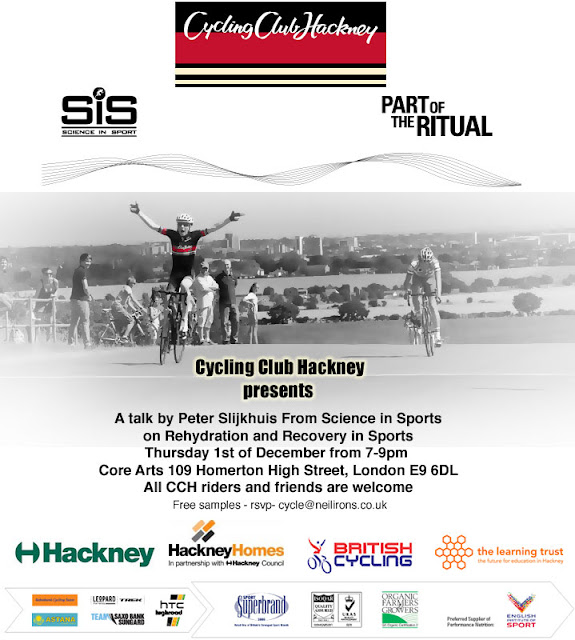 Cycling Club Hackney presents a talk by Peter Slijkhuis from Science in Sports
on Rehydration and Recovery in Sports - all CCH riders and friends are welcome to come along and find out more about this important aspect for all kinds of cycling. There will be a question and answer session and Peter will be bringing along samples of SIS products. If you could let me know if you can attend so I can let him know numbers it'd be appreciated.
Date - Thursday 1st of December from 7-9pm
Venue - Core Arts 109 Homerton High Street, London E9 6DL.
This is the second in a series of winter talks and workshops CCH are organising - stayed tuned for further events to come.

CCH members pre-kit order; item request session @ 1 Olympus Sq E5 0QJ from 7.30am - 8.15am Sunday 27th November (before the delayed early riser ride to Box Hill). This is to help us to put a sensible order together, additional stock numbers will be added as educated guesses. 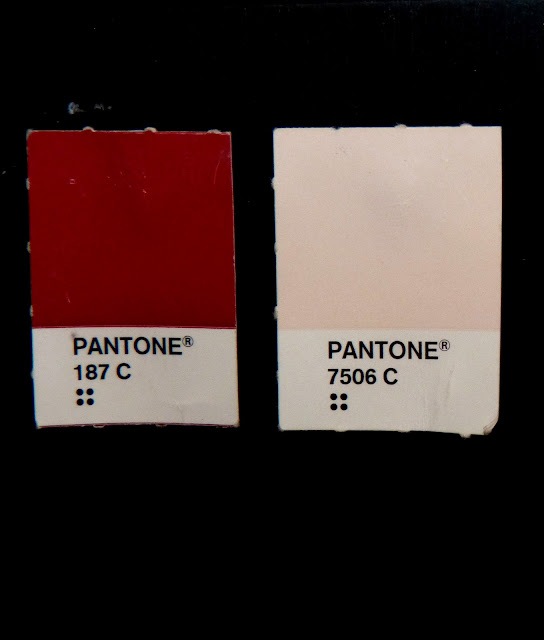 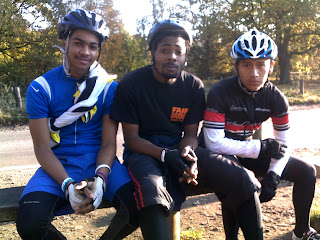 CC Hackney welcome the Daley brothers Shaveh & Jac (pronounced Jace) pictured here taking a break in High Beach Epping Forest. This was shortly before heading home to round off another decent Saturday club youth training ride. Out of this picture are their supporting cyclists Jason Evans & yours truly.
Posted by Keir at 22:15 No comments: 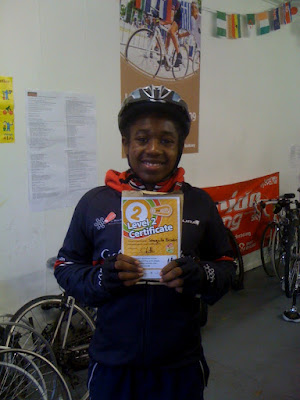 Saturday 19th November 2011
Shaquile proudly holds up his newly acquired L2 Bikeability certificate of achievement. He earned this by attending the 'Young Hackney' sponsored training sessions that were delivered at The Bridge Academy earlier in November.
Posted by Keir at 22:07 No comments:

As some of you will no doubt be aware through your Hackney Today newspaper it was the 2011 Hackney Sports Awards on the 4th of November at the Empire. CCH were well represented although we never came away with the main prize this year. Tao and Alex were second and third respectively in the Under 21 Sports Person of the year category. Bella and Alexander were both short listed for the under 13 Sport Person of the year, as the Dmochowski siblings were nominated for their fencing prowess it's maybe just as well one or the other never won the prize - swords might have been drawn. Bella did however receive a Silver award from the Youth sports Fund, whilst Tao and Alex both received Gold awards and Logan a bronze. Harry and myself had to take to the stage as well as we received funding for further coaching courses - it pays to get in there early Andy...
Posted by Neil at 21:25 No comments: 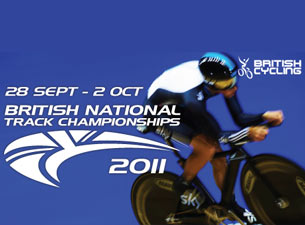 Tickets on sale from 9am this morning go to: http://www.ticketmaster.co.uk/promo/11dkd1

pass code: HACKNEYPREPARES is SOLD OUT

Never mind the disappointment if you're ticket-less, it's much more real to do it than watch it; sports in general. Go for a ride, a run or a kick around, you'll feel better after.

Cyclists are sometimes described as 'flying' when in great form...

CCH wish Clem & Rhys all the best in 2012 season when they'll be riding for semi pro outfit Team Orbea. Good luck lads riding in/as a team will be a great learning opportunity, well done and congratulations.

"Both Clem Berrill and Rhys Howells join the team from the successful Hackney CC, a club that has a depth of young talent and has quickly become a hotbed for developing and encouraging young riders from this part of the region."

At this point racing additions in CCH colours for 2012 will be the riders; Thomas Smith, James Clark and Jason Evans. Also there will be the emergence of aspiring club racers Zoe Desclayes, Joel Alencon, Shaveh Sad, Liam Pegram, Bart Walbank and Sophie Powel.
Posted by Keir at 00:52 No comments: 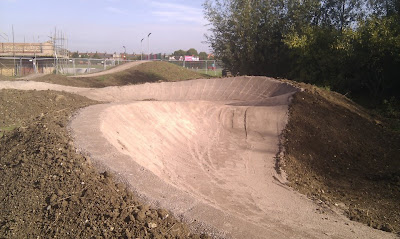 The Trax mountain bike and BMX club are delighted to invite the local community of Tottenham and London, the wider bike community and all our members, friends and family to the official launch of The Lordship Loop bike park on Saturday Dec 3rd.
Lordship Loop is the exciting new 391 metre long pump track' style trail loop suitable for both mountain bikes and BMX in Lordship Recreation Grounds in Tottenham, London. 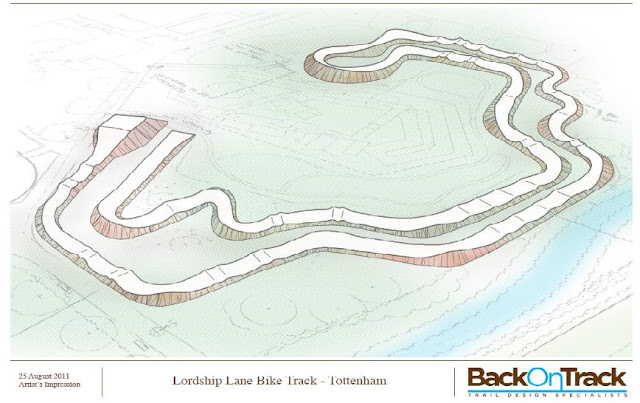 “This much anticipated launch brings both a much needed community run facility for youth in Tottenham. The whole bike world and the local community are coming together to make this a sustainable venture. The launch heralds a new era of mountain biking as it is brought to a new generation of riders in an  urban setting. Hopefully the first of many, we welcome all to come and celebrate this historic day.” Daniel Mintz Chair of The Trax

The Trax are delighted to announce our affiliation with the IMBA (International Mountain Biking Association) and their massively useful award of a tool grant as their kind support to ensure the loops and the clubs sustainability. The tools will be awarded on the day by Mark McClure, chairman of IMBA-UK.  To find out more about the work of IMBA-UK or to join as an affiliate check out www.imba.org.uk

If you are interested in setting up a stall in the hall, or donating prizes for their launch activities or sponsoring our awards etc then please get in touch.
The bike world comes to the local Tottenham community on Dec 3rd. Join in the fun. www.thetrax.co.uk
Daniel.mintz@yahoo.co.uk 07990577206
Posted by Neil at 22:39 3 comments:

Be Safe Be Seen Event

12th November - free bike tagging at London Fields Lido. At the same time Hackney Cultural services will be running a competition for two age groups 11-13 and 14-19 years old around graffiti art.
They  will have a professional artist at the event who will go through  the techniques of design and demonstrate how ideas are put together. 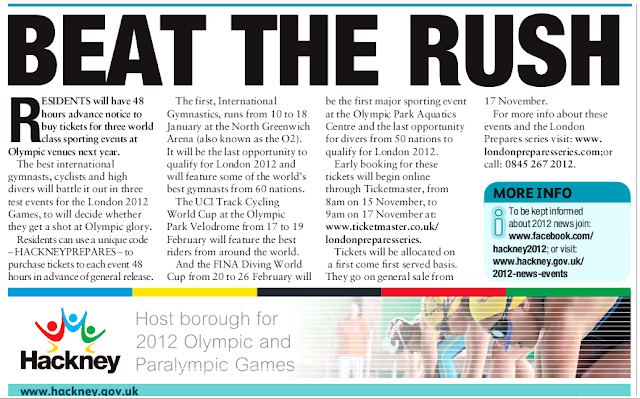 Cycling Club Hackney on Facebook it's official, spread the word... 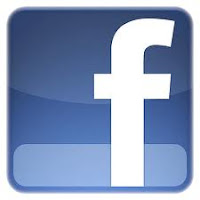