The final of four youth section training sessions is taking place on Sunday. This block of training has been organised to help bring on the best fitness & technique possible for our young riders who have been selected to represent Hackney in the cycling event of the prestigious London Youth Games 2009. (LYG '09). Saturday July 4th is the date,Crystal Palace is the venue.

It's great to have Alex Peters back in the team, the speed of his recovery from a broken collar bone has been startling and has confounded his doctor who had said that he would not be ready to compete in the LYGs. Alex had another view on this prognosis, his rapid return ahead of schedule even enabled him to ride well in the handicap TLI road races on the North Weald Arodrome last Tuesday evening. Young Peters turned in a fine performance and rode at the front of his group of 'B' category (mixed & adult) riders and finished well enough up the field to draw praise from the event organisers.
Another young CCH rider with real talent & potential; Tao Geohegan-Hart, took part in a race from the same series two weeks earlier. He too has made a miraculous recovery, his injury was a broken index finger on his left hand. This week Tao has been cleared to ride the LYG's by his mother & doctor.

Alex & Tao returning to the team has injected a boost to Hackney's chances of doing well. The team's result for Hackney is based on their collective times in total, eight riders compete from two age groups (U18s & U16s) and the three fastest times from each quartet count.
The under18s ride four laps at 5klm and the U16s complete two circuits at 2.5klm.
A full report & pictures will follow soon after the event.

All about Mike Burrows 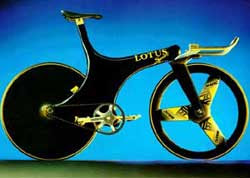 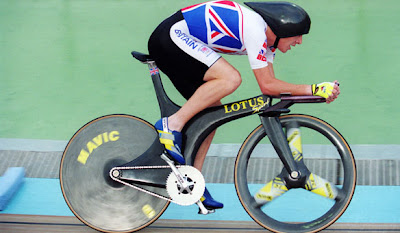 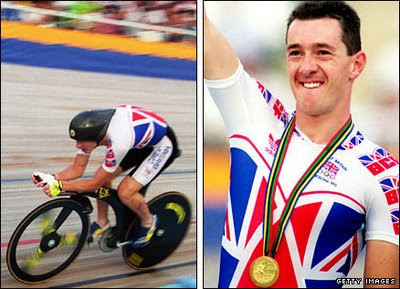 Following up from Stuart's posting about Mike Burrow's new bicycle you can learn more about the man and his bike designs here.
Not enough people know that Mr. Burrows is not only responsible for 'Rat-Catcher' recumbent racing cycles, he was the designer of the cutting edge Lotus racing bike that carried Chris Boardman to a seminal Olympic gold medal in Barcelona 1992.
Mike is also the talent behind the seriously useful 8-Freight transportation bicycle, the same machine used by CCH to carry all the equipment used for staging their numerous grass track racing events in 2008/09. 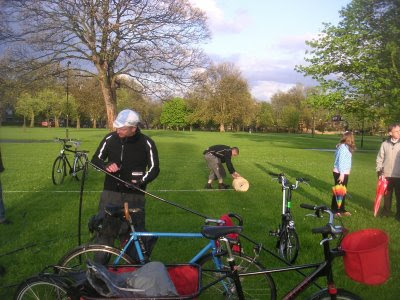 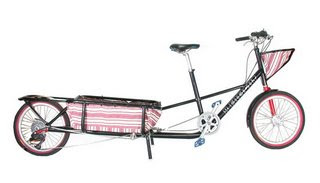 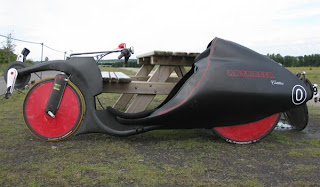 Now that's a bicycle
Posted by Stuart at 14:32 No comments:

On Wednesday 27th of May 11 young people and 5 adults from Cycling Club Hackney travelled by train to Newport Velodrome, this was almost all of the riders first time on an indoor track.

It was an early start for the group meeting at 8 o'clock outside the Hackney Town Hall, we then travelled across London to Paddington Station by Public transport, jumped on our train and were off to Wales. The train journey took around 2 hours and some of the riders that compete regularly started to realise that the velodrome was not actually that far away.

As the train pulled into the station we looked out the window and it was raining really heavily, although obviously this wouldn't be a problem with the indoor track. We all hopped in cabs and headed off to the track. One thing myself and some of the other riders noticed was that the facilities in Newport where ace, they had everything in one small part of the City. As the taxi drew to a stop everyone really started to buzz.

Walking into the Velodrome we saw pictures of many of the Welsh Cycling and International Track Cyclists riding on the track we where about to ride. After a short wait, we all rushed into the changing rooms, eager to get underway. After changing we headed to another room to pick up our hired Pinarello Track Bikes for the session.

Soon we found ourselves in the track centre and staring at the banking, it seemed very steep, especially after the only track we had ridden was the outdoor and much longer Herne Hill. We where soon joined by riders from East London Velo and VC Londres. 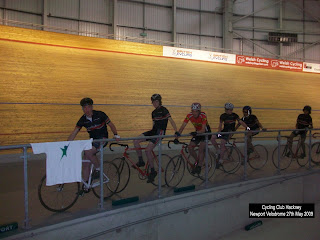 Next we met our coach for the day, Courtney Rowe. We signed on immediately and where then split into ability groups. The most experienced and fastest riders where first onto the track and i was sitting fourth in that group, Keir was at the front and he slowly cranked the pace up as we moved further and higher up the track. We started on the flat section on the edge on the track centre and then going a little faster moved onto the light blue boarded section known as the Côte D'Azur this takes about around 10% of the track. The first thing i noticed was the creaking of the wooden boards and then as we rounded the first corner i saw how white my knuckles had gone from holding the handlebars so tight. 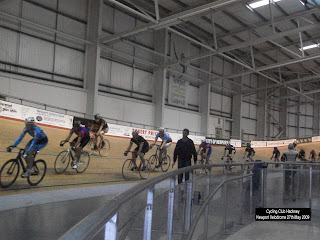 We upped the pace again after a shout from Courtney and moved 20cm onto the black, the inside of this line if where the track is officially measured from. I was really starting to feel the corners now, the feeling was like no other. Again Courtney signalled and again we moved up the track, this time up 90cm to the Red sprinters line. The higher we got the better it felt, and the more you felt gravity sticking you too the wooden boards. Around half the tracks width (roughly 250cm) up was the blue 'stayers' line, looking up from the sprinters line, the stayers line looked very high up especially on the corners. However moving up onto the line felt surprisingly easy, Courtney knew the exact speed we would need to be travelling at to not slide down the track and we where well on speed. We stayed up on the track for a lap or two and then slowly moved down line by line, lap by lap.

After our first ride on the track Courtney put us through various training drills including practicing overtaking and through and off, generally we just learnt to ride the indoor track, I think it was also a really good team building experience. We rode and rested for around 3 hours and ended up with a Roadies Pursuit race, this was fun and gave us a bit more of an insight into racing on the steeper and shorter indoor track. 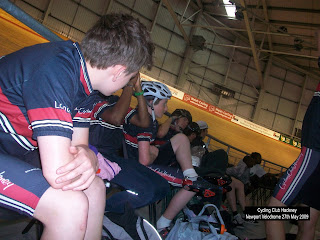 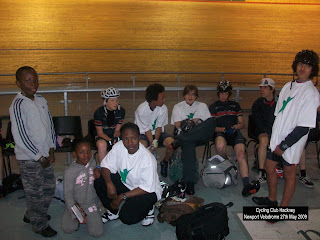 We left the Velodrome around 5 o'clock and headed straight to the local supermarket to restock on some much needed energy. After that it was back to the Newport station, onto a train and back to London. We arrived home around 10 o'clock and where tired after a very long and tiring day. 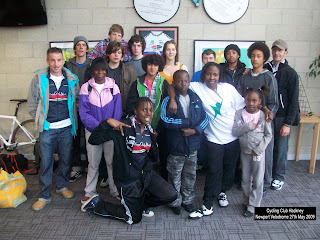 This opportunity wouldn't not have come around had it not been for the Stuart Feakins Trust who funded the trip and for Keir Apperley who organised everything perfectly. From everyone who rode thankyou very much it was a wonderful experience and we all thoroughly enjoyed it thoroughly. 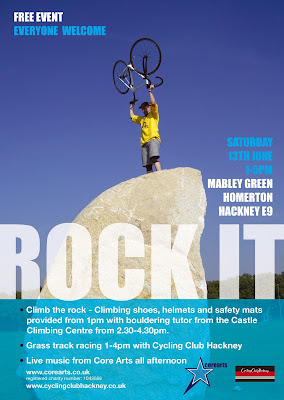 Please click poster to see the details clearer.
On the day CCH will be organising the grass track racing, this will include the following races: One lap time trial, roadie pursuit, hare and hounds, devil take the hind-most, scratch race and the points race. The overall winners will be those that accumulate the most points from each event also known as an Omnium. This format is to be implemented in the inaugural forth coming six week grass track league starting on Sunday 26th July 2009. (More on this later)

Saturday 13th June: Please bring your bike, if you don't have one we have cycles and helmets to loan.

About Core Arts; A close partner of CCH, Core Arts is a well established registered charity that uses the arts to provide avenues of relief and recovery to those going through mental health difficulties in Hackney.
Posted by Keir at 15:53 No comments: