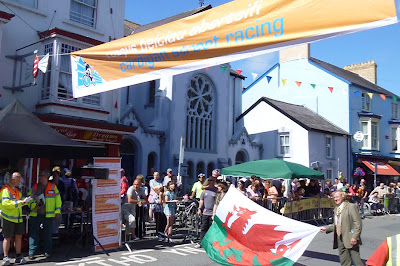 Whilst some of our senior members were away winning the team prize in the Tour l' Ain - see below - some of the juniors have kept themselves busy by finding races to compete in on their travels. 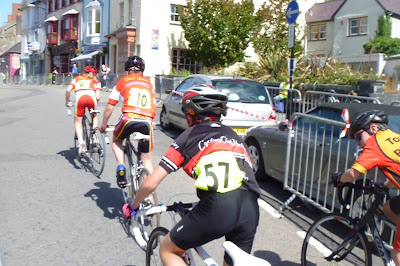 Logan using the Towy Racers to tow him up the hill.

Logan claimed first place in the Under 12 boys race at the Cardigan Championship Street Races in Wales. The large crowds were desperately trying to find shade from the hot sun all the way around the fantastic town centre circuit including plenty bends, a hill, some cobbles, a castle and a river- and they were treated to some very good racing. It made me really want to see a similar street crit' here in Hackney. 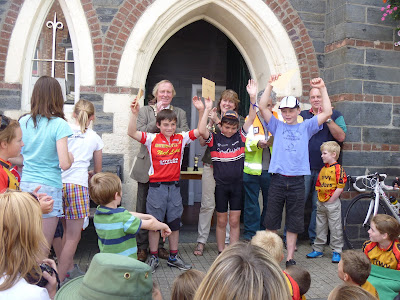 Logan picks up his prize for coming 1st -pity he's not welsh or he could have been welsh champion.

Rhys Howells later raced in the E/1/2 Welsh championships but missed out on the crucial break. Full results here. Some footage here. 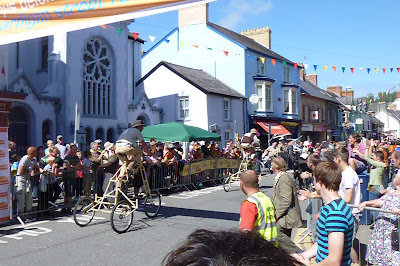 The fastest traders in the west race.

Meanwhile Elliot was racing up in one of the heartlands of British cycling - Lancashire where he competed in the Vanilla Bikes Salt Ayre League and came second in the U10s. Full results here. He was impressed by a young six year old racing in Sky colours and met this young chap's dad after the race who is something of a keen cyclist too. 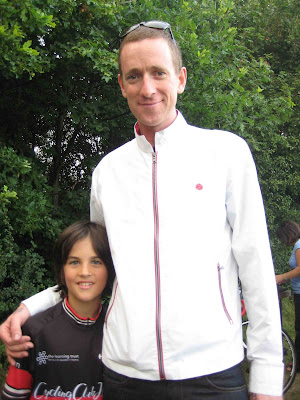 Elliot with Bradley Wiggins - note the wide angled lens needed to fit them both in picture.

Both Elliot and Logan raced alongside the Mitchell brothers at the Whitewebbs summer crit' at Hoghill last weekend. Leonard claimed 3rd place in the U10s with Edgar getting first place in the U8s - having to time trial his way around the course almost. Results here. Well done to them all for putting more points on the board for CCH and if you got up to any interesting cycling activities over the holidays please let us know.
Posted by Neil at 18:16