On August bank holiday Monday 25th, a contingent of our youth section will be racing in the Southend Wheelers Crits at The Redbridge Cycling Centre. The team will be supported by CCH's club coaches Keir Apperley & Simon Bateson.
For anyone who'd like to see some future east end talent in action and would like to say they were there, please do come along and make some noise for the Hackney crew!
First youth race start is at 10am
This event is part of our youth squads preperation for the London criterium championships to be held on the same circuit on 21st September.

If anyone wants to go out this Monday, be at the usual place at 10am. I will wait five minutes!

I am away on the Sunday so enjoy the ride without me. Redbridge are doing a "Family Fun Day" at the Hog Hill (now Redbridge Cycle Circuit) track which might be a good opportunity to check it out. Details are here.
Posted by Stuart at 17:57 No comments:

This years big HPV event was of course the world championships which were hosted by the BHPC at RAF Bentwaters in Suffolk.

About 120 riders gathered for the occasion including your humble correspondent and Denise Wilson; "Team Bikefix". I have to report that the venue was great, the weather dramatic, the racing superb, and champions were created.

The format for the weekend was not what I would have chosen. Saturday took advantage of the giant runway with 200m flying start sprints followed by a 1km sprint from a a standing start. In the the first event you gradually wind up your speed for a kilometer and then try to go like absolute hell for the final 200m. In the second event you go like absolute hell from the beginning - surely an event designed to break both bicycles and people. This is definately not my metier, but I have to say that despite my indifferent performance I really enjoyed both races. The new hour record holder Damjan Zabovnik (87,123 km in one hour; going backwards! read more) was there to try and set a 200m record, but the track was way to short and the surface too uneven.

The afternoon was devoted to the three hour race on a huge circuit. My problem with this event is that I am utterly inconsistent and tend to ricochet between optimism as I hang dessperately onto the wheel of someone going much faster than I can, and despair when I'm dropped and sink gradually back through the field. It was during an early moment of realism that I hit a beautifuly wheel shaped gap in the cement track and violently blew out my rear tyre. Anger and dissapointment were mixed with relief as I trudged back to race HQ. After an hour and a half of drinking cider and changing my tyre in a leasurely fashion I jumped back in for an hour of fun, with no pressure and no glory, and crossed the line with the winning women; the best seat in the house!

The format on Sunday was hour time trial followed by 30 minute criteriums in the afternoon. I messed up the time trial but had a fantastic race in the afternoon as the sun shone and we all chased around the superb circuit, with technical turns, a nice hill and a good surface. Beaten by Scottish Keith up the final hill. Mike Burrows did a fantastic race for a 62 year old - this is him in the final climb.

The sun continued to shine on the prize giving, we all felt tired and satisfied and there were lots of lovely pots for prizes. A great event. Next year its Holland.
Posted by Stuart at 10:00 No comments: 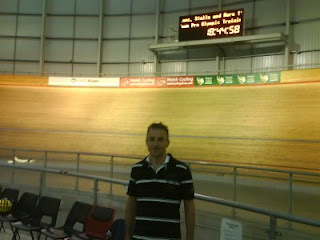 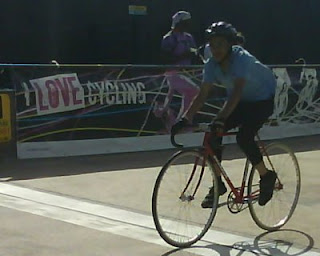 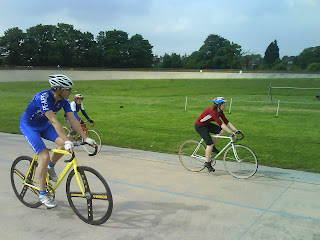 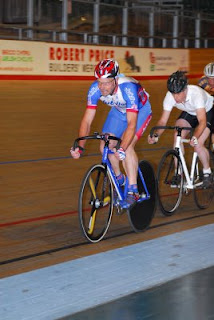 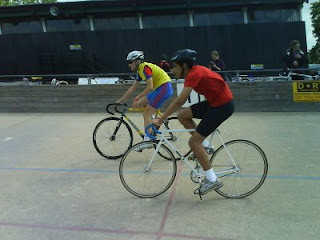 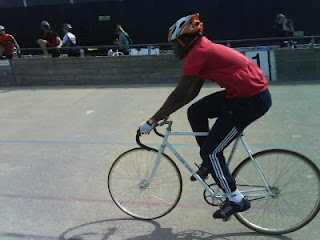 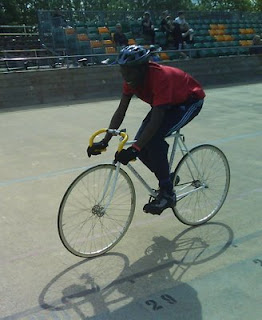 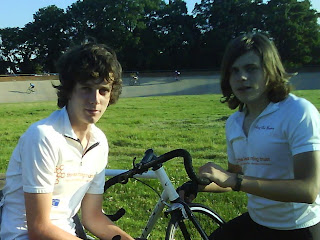 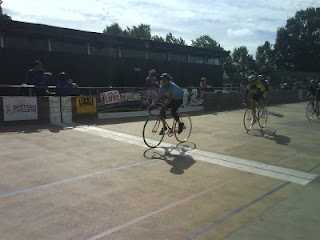 Here are a selection of pictures taken over the summer that capture some CCH action on the track. Locations are at Herne Hill velodrome during induction/training sessions and at the mid-week track league. Junior riders are Clem Berril, David Dryburgh, Kevin Kabey, Freddy Trimble, Ato Qualm-Quashie, Freya Gannon-Burns, Louis Carpenter & Kyroah Pang. The shots at Newport indoor velodrome is where yours truly reached sixth place in the points race at the 2008 national masters championships.
(As usual - to get a larger view click on the image.)
Posted by Keir at 11:22 No comments:

Please help us flesh out the application for next years grant funding. We will be holding a meeting soon to try and finalise the plan for the year.

Targets
no of riders, how to get them
Training levels for staff
Results!
Running grass track league
Membership

Resources needed to achieve desired results
How many qualified staff.
How many training sessions in the year:
Staff Required
Hours per week
Transport to events
Bikes
Team kit
Indoor training equipment
Base for training and meetings
Posted by Stuart at 13:13 No comments: