For once it looked like the competition format had stayed the same as the previous year so we knew sort of what to expect. With two time trial competitions for under 16 boys and girls, then under 12 boys and girls - followed by circuit races for the older boys and girls it all makes for a very long day at the Lea Valley Velopark. As riders inevitably get older and become ineligible to compete this means the team evolves each year and a fresh bunch of talent has to be found to step up to the challenge. The hackney squad is always strong in depth and reserves are ready to step in if needed and they usually are the riders who take up the reins the following year.

The first competition was the under 16 boys 4 lap time trial. Kai, Ewan and Tom all posted fast times in the top ten to get the team off to good start.


The girls under 16 time trial was next with Jakita, Charlie and Anoushka riding for LBHackney.

The girls did really well with Anoushka posting the 2nd fastest time and Charlie the third fastest it looked like we were right up there in the points. (There's a rather baffling points system for the overall with the top two rider's points counting - 50 for 1st and so on downwards.)


The next set of races were the under 12 boys 2 lap time trials. Milo, Milton and Elliot all produced solid times to keep us in contention but other strong contenders such as Southwark and Sutton are beginning to look likely winners.


Next up were the under 12 girls - Ashleigh, Ishanna and Laila Grace all worked hard to post times in the top 20. By this time only the judges knew who was leading leaving the riders to enjoy themselves
and meeting friends and riders from other boroughs whilst waiting for the circuit races to start.

The u16 boys circuit race was first - at only 12 laps this is a bit shorter than what these guys are used to so it looked like being a fast race. Both kai and Ewan took turns a`t the front showing they weren't afraid to do some work and force the issue. Eventually the race split and with both of them in the front group things started to look good at least for podium spot in the overall. Kai finished 5th and Ewan 8th.

It was now down to the girls and Charlie and Anoushka didn't disappoint both making the early break of around 8 riders. The pace intensified half way through the race and Charlie dropped back picking up four other riders. Come the final lap the pace slowed and the two bunches came together for the sprint - Anoushka was just pipped for the win and Charlie finished 9th. Would this be enough to ensure a podium spot?


The inevitable long wait whilst the judges sorted all the results gave us time to pack up and reflect on how well the riders had done. Unknown to us it had been all square between three teams going into that last race. Sutton and Kingston finished equal second and hackney were crowned champions once again. Well done to all the riders and reserves on the day and all the other riders who did the trials meaning those who made the team had to push harder to be there. This is the second time Hackney have the trophy two years running - previously its was 2009/10 - and the fifth time in total lifting us clear of all the other boroughs. Even better the result helped LBHackney to their best ever placing in the Jubilee cup - the overall cup for the thirty or more sports that thousands of competitors from all over London compete for - 2nd place. go on Hackney!
Photos - Andy Bardill.
Andy's full photo gallery can be found here on the CCH website.


About Type 1 and Me:
I was diagnosed with Type 1 Diabetes in June 2011 when I was 8 years old, I am now 15.  Type 1 Diabetes is where the pancreas stops making insulin.  Insulin is the key to unlocking glucose in the bloodstream to make energy.  Everyone with Type 1 Diabetes needs to take insulin either by injection pens or by pump.  I use an insulin pump Medtronic 640g – insulin is delivered via a cannula 24 hours a day for basal insulin and for bolus (meals) I take my blood glucose, count the carbs and the pump then delivers the amount of insulin according to the time of day, my blood glucose reading and the amount of carbs I am going to eat.  Now this is on a normal day – when I am cycling, racing and training I need to take all these factors into account to prevent hypos (below 4mmol).  The ideal range for a Type 1 is between 4mmol – 10 mmol.  Lots of information – yes – and all of which need to be followed for every meal, prior to any exercise and after exercise and 24 hours a day.  From the first weekend after I was diagnosed I continued to cycle and take part in sports.
Team Novo Nordisk
Phil Southerland, co-founder and CEO of the team, and Novo Nordisk came together to create Team Novo Nordisk, based on a shared vision to inspire, educate and empower people around the world affected by diabetes.
In 2006, Phil Southerland and Joe Eldridge assembled a group of eight cyclists with type 1 diabetes to take on the grueling 3,000 mile Race Across America and raise diabetes awareness. The team went on to win the event in 2007, 2009 and 2010 and quickly became a magnet for endurance athletes with diabetes.
Southerland’s passion for cycling and mission to inspire built a world-class racing program of athlete ambassadors who were changing the way the world saw diabetes. Today, Team Novo Nordisk competes on a global scale and its athletes are vehicles of empowerment for people with diabetes worldwide. 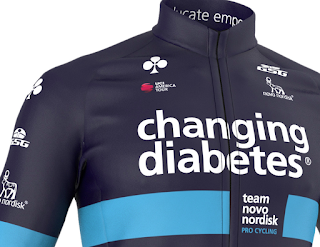 Team Novo Nordisk Talent ID Camp – Athens, Georgia USA:
A year ago I put in an application into Team Novo Nordisk to join their Talent ID Camp.  This application asked for information about me, my attitude to Type 1, my average blood glucose readings, my cycling history and training.  Each month I have had to e mail the team about my training and tracing performance and also have shared my strava information with them.  Last week I was informed that I have been selected to join the talent ID Camp from the 2nd – 11th July 2018.  (links below) During this week I will be training with experienced athletes living with diabetes. There will also be lots of input with doctors and health care professionals to learn more about sports and diabetes management.
https://www.teamnovonordisk.com/team-novo-nordisk-2017-talent-id-camp-1/
https://www.teamnovonordisk.com/2017-talent-id-camp-video/
Yes I have Type 1 Diabetes, Type 1 will not stop me! I love cycling and racing with type 1 and hope my experiences will inspire others. - Kai Watts.