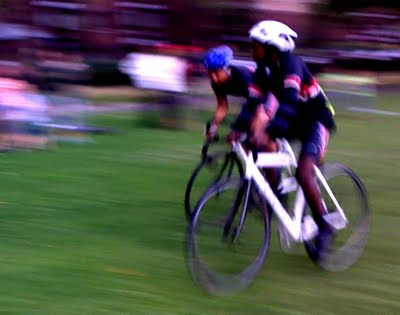 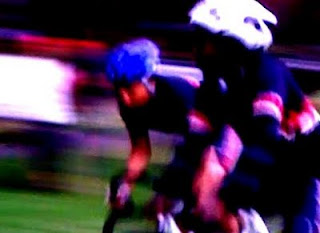 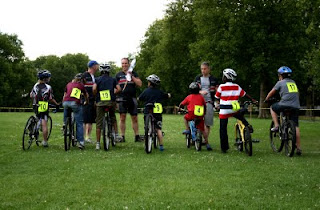 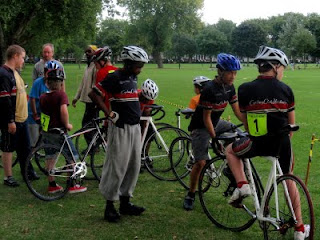 The first two weeks of CCH's inaugural grass track cycle racing league have proved to be a popular attraction to many youths in Hackney with 25 young people joining the races last Sunday and 18 youngsters racing during the session on our opening Sunday August 2nd. Also in attendance were a good number of parents and adult riders. Given the recent down pours we've had, on the day the weather conditions were clement and the clouds parted to make way for periods of sunshine. Under foot the ground held firm, we had short uncut daisy length grass to ride on that provided grip enough around the track bends.
Day 1 Event 1 TT (Time Trial) A stunning ride came from Tao G Hart who at 14yrs provided the fastest flying lap by covering 200m in 21.00 seconds, a course record for all comers still standing after week two. 17 year old Clem Berill came second with a time of 22.07s and Kyroah Pang (14) came 3rd with 22.28s.
In the under 12s 'roadie pursuit' where four riders start at equal points around the track and compete by attempting to take each other out of the race (without making contact of course) by over taking riders ahead. Sounds simple? Ned O'Regan eventually over came all his adversaries to win after being locked in a lengthy and grueling bout of attrition cycling. He finally erased the resistance put up by the last rider rolling, battling Alexander Dmochowski, who in the end had to settle for second place. To follow this gritty display Ned stepped up again to defeat all opposition in the under 12s five lap scratch race by swooping in the final 100m to eclipse Ayo Laval's gallant effort to win just 3m before the finish line. Third place went to Bede G Hart who rode well against on form opponents.
In the under twelve & girls elimination race or Devil Take the Hindmost there was keen competition between two under 16 cyclists Bella Dmochowska and Matilda O'Regan (Alexander & Ned's older sisters) who both produced an exciting sprint finish - Bella won it by a tyres width spoiling a possible family double celebration by the O'Regans.
Our loan bikes were provided by the Met Police (Genesis Flyers) and the new youth size track cycles from Isla Bikes (which were a huge hit) came courtesy of the series sponsors; London Cycling Campaign.
Week two brought more riders and a return of those keen to try again at figuring out what it takes to get around with the leaders and push on for a win.

The points score board after two weeks will be posted shortly
Posted by Keir at 08:18