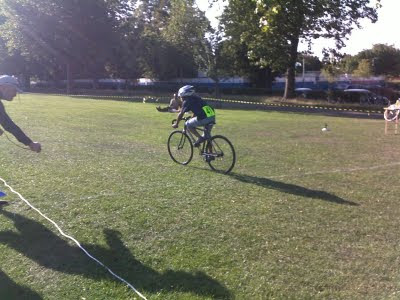 Sunday August 16th Hackney Downs
The penultimate round of our Grass Track Racing League was held in bright sunshine, it was warm and breezy with the prevailing wind blowing down the back straight in an easterly direction. Attendance was up with a number of new riders on the scene. Nearly all the previous competitors returned to settle scores and garner more points on the way. They were hoping to improve on their overall league standing ahead of the deciding meeting next Sunday 23rd August.
In the flying lap TT most posted improved times. The first ride of the day won the event and made our time keeper, Trevor Parsons, double check his clock - 19.72s! This time is now the new flying lap record owned by 14 year old Kyroah Pang. His daring ride was right on the edge without loosing it, he powered down the straights, reckless maybe but the lad maintained control in and out of each corner to steer his way into the record book setting a new target to beat.
In the 8-12 year old Group 1 Roadie Pursuit, new youth rider Logan Demochaux was a cycling packman chomping up the riders in front, however he had to give it everything to overcome Ayo Lawal, the last remaining rider out of five starters and his final obstacle to victory in this exhausting event. Group 2 (8-12s) was won by Alexander Dmochowski in another desperate and chaotic pitched battle on bikes. He needed to work very hard on the way to picking up appropriately named and talented female rider Charley Dash (3rd) and 2nd placed Henry Boateng. The 12 -15s Group 1 was won by Clem Berrill, 2nd place went to Deonte Benoit-Jackson & Danniel Passam came 3rd. Starter Kyroah Pang did not finish, he cooked it to far during the chase, leaning over until grip was lost and he went to ground. Suffering a minor abrasion to his left hip he said "It's just a flesh wound but the bike is ok!". Numero uno in group 2 was Jake Wilkinson who out paced his twin brother Ryan Wilkinson who came 2nd. The 3rd placed rider was Bella Dmochowska. Of the five starters in this race Bella drew the loudest applause for her fierce, spirited but in vain refusal to give up in the face of Ryan's relentless pursuit. In the Devil Take the Hind Most and Scratch races notable rides came from Javon Benoit-Jackson who came out top in both of his 8-12 group events and Logan Demonchaux-Irons who won his Group 1 'Devil' race. Another promising performance came from Javon's older brother Deonte Benoit-Jackson who competed very well against seasoned racers in his 13-16s scratch race group to achieve third place. Kyroah Pang won both 13 - 16s massed start races and put himself on top of the leader board for the overall champions prize. On the final Sunday, Kyroah's rival, training partner and club mate Tao G Hart will be back with a view to claim back his top spot. This tussle will be interesting to see.
In advance, the organisers would like to thank the sponsors, the riders, parents and volunteers who have made this series possible. We're now focusing on making the final day extra special. Championship trophies and medals for 1st, 2nd & 3rd placed competitors will be presented soon after the last race. Prizes & recognition for all riders will be handed out and expressed also. As requested last Sunday there will be a girls only race (we have enough now) and the adults will not get away with just doing a time trial...there will be a 10 lap adult's scratch race too.
Posted by Keir at 08:33