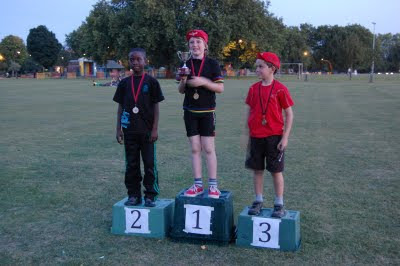 Podium finishers in the 8-12 year category listen to the anthem of Hackney as they stand on ceremony after receiving their medals and the winner his trophy.

August 23rd 2009.
GTRL1 - league final day on Hackney Downs.
By all accounts the series has been successful and there was obvious enthusiasm amongst young people. Much was learned along the way, quite a number of new riders seem to have been caught by the buzz that racing on bikes causes. Some thought we would see more riders from the fixed wheel scene - we were looking forward to seeing the fixie crew racing on grass, next time maybe.

As well as the medallists all competitors received prizes, this is thanks to generous donations from our supporting bike shops: London Fields Cycles, Mosquito Bikes, Two Wheels Good and Bike Fix. Riders enjoyed competing and as a progression are looking forward to visiting Herne Hill Velodrome on Wednesday 2nd September for a club training session as a group prize from the league sponsors; London Cycling Campaign. Special thanks must go out to all the helpful volunteers and parents without which the events would not have gone on so easily.
The next cch grass track racing will be on Saturday 26th September over at Mabley Green as part of the Wick festival.