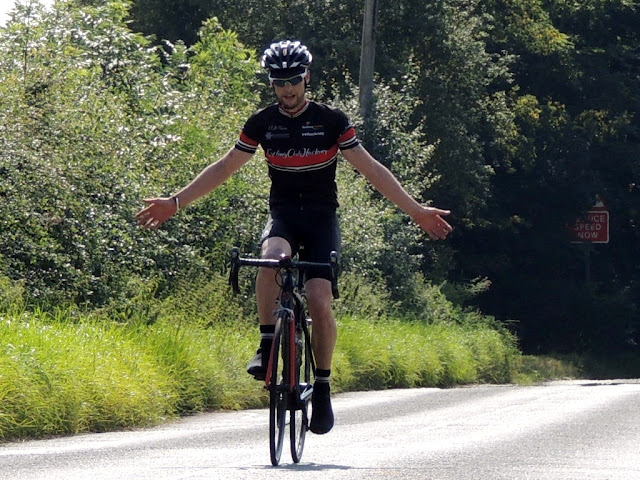 After a decent result at the final round of the Hog Hill Summer Series I needed 9 points for my second cat license so I was aiming for third or better as I lined up at the ERRL Mid-Suffolk road race. The 10km circuit was a mixture of main road, twisty B-roads and a finish line at the top of a half mile long drag. The race consisted of seven laps of the circuit and started fairly sedately but two primes stretched things out a bit and a group of five went away on lap four. We had to work to bring them back but eventually caught them at the bottom of the hill with two laps to go. I had a dig up the hill but the bunch came with me so drifted back before going back to the front as we ascended the hill the penultimate time. Turning onto the windy main road I span over to a Maldon rider who'd attacked and kept pushing when he peeled off.  I quickly got 50 meters and put my head down hoping that no-one would want to bring the bunch over on the last lap and started to come to terms with the fact that I'd have to ride 9k on my own to the finish. I made it into the B-roads about 100 meters up on the group and lost sight of them, I tried to keep as smooth as possible through the corners and get my breath back so that I'd have something left for the final climb. The road opens out a bit at the bottom of the circuit & I saw that the bunch had made up some ground, determined not to look behind again I buried myself up the final climb and realised I'd won it with about 20 meters to go.

I can now join Ben Brown and Keir Apperley in the orange numbers at Hog Hill, a mixed blessing...
James Fairbank
Posted by Keir at 20:17