Last Friday saw me pack my cycling clothes and head off up north for the international youth tour of the North West. A five-hour journey with many slow points through traffic; when we finally reached the campsite I sat there and watched my dad struggle to put up the tent. I ate then, after some joking around with Ned, off to bed

Stage 1: I got up at seven with an hour to have breakfast and get ready for racing. At eight we headed off to the UClan sports arena in Preston. After parking the car on a grass verge at the edge of the car park we went to find space near the circuit. Now it was time to get on the bike and recce the course. Then race time a fast five-lap crit I sat in the back of the peleton not really doing much. Finished on the same time as the overall leader.

Stage 2: After that first short stage it was onto the rollers and drinking a bottle of rego recovery. After a short warm down I had a large pot of pasta (thanks mum). Then it was back onto the rollers to warm up for the twenty lap second stage. Onto the start line (with a lot of jostling). After three laps of the race the rain started to come down. Then after thirteen laps a massive crash went down and I had to resort to my cyclocross skills and fly up the grass verge. When we got to the start Finish line we were stopped and taken of the course to allow an ambulance to collect an injured rider. We got back under way again. I, with tired legs, finished in the group on the same time as the leader.

Stage 3: RAIN!!! That is the first thing to say about this stage. Luckily this course was a simple up and back. Ned and I managed to find a small space covered by an awning. On this stage I again sat on the back of the group. There was a massive slip in the middle and a crash that I missed, this time we did not have to stop (however I think Ned was not as lucky as me). Again I rolled through the line in the group.

Stage 4: This time we went the other way round. I rode in the back third of the group not being able to move up any further. There is not much to say about this stage one minor crash with one person going down, another sprint finish rolling through in the bunch. Overall 23 seconds down. 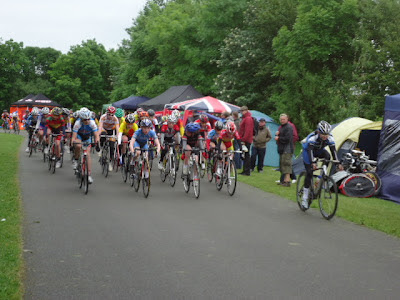 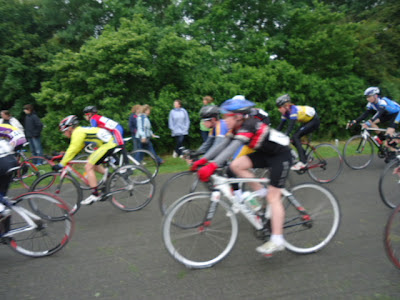 Stage 5: I started the stage in the group and over the first six laps it was whittled down to twenty riders and then a massive attack went from the overall race winner Dan Tullet I got distanced into a small group of four. I attacked and got away with one other we rode the rest of the stage together until in the end I won the sprint on the line for 38th on the stage. Taking 35th on the overall.

I would like to say a big thank you to CDNW for a great event.