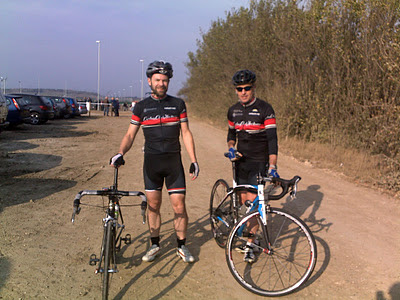 Charlie Scott and I visited Gravesend and the newly opened Cyclopark. We were there to participate in the first of the SERRL Winter series races. The weather was too kind for the time of year and we felt fortunate to be racing in shirts and shorts come late October. This said there was a fair old easterly breeze blowing in from the English Channel.
At the start line about seventy riders lined up for the one and half our challenge around the full circuit, two thirds of which were 3/4 cat riders. Charlie took off with them while I waited for a minute to proceed with my group of 1/2 cats. After a few laps of the course (great to ride btw) two riders clipped off in pursuit of the 3/4 bunch, I followed two more up the road and caught the chasers, chasing. In the end a gang of four stabilized to maintain a reasonable lead, working well to eventually catch up with the 3/4s. The ensuing race within a race lead to a confusing bun fight of a sprint where it was hard to tell what happened. Apparently I arrived in second place according to the sensor chips we were issued with. Charlie finished well but just out of the top ten.
Great course, good race shame about the mix-up at the end. I'm looking forward to heading back there next year, doubtful about doing any more winter stuff, Charlie and Andy O'Reagan may go for some more. It's half hour by car, an hour by train - well worth the trip I'd say. Pictures