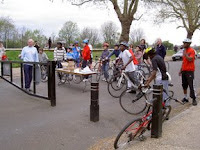 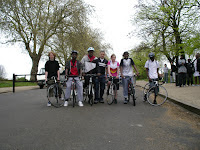 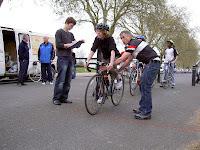 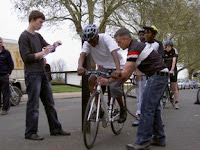 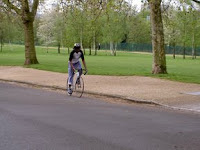 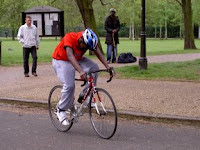 Finsbury park in Fnsbury Park was the setting for the invitation 2008 Whitewebbs CC Time Trial for youths and beginners. CCH had six young riders entered, four of whom were competing for the first time. The two kilometre out & back course was along the wide road way on the outer side of the park. The riders were set off down hill towards the main gates from the start/finish line up by the tennis courts (Hornsey end). The 1st U-turn was at the bottom of the hill over by Green Lanes. Two passages of the route were required which amounted to quite a technical challenge of four short climbs, two head wind sections, three U-turns, one left hand and two right hand corners. The road surface was variable with parts being quite raw. It was something like the 2007 Grand Depart London Tour De France prologue without two million fans cheering, the fancy Gendarmerie motor cyclists and any iconic landmarks for backdrops other than Arsenal FC's Emirates stadium of course. The weather was overcast and a little windy but not cold, It showered for a while during the event.

Four of our CCH riders were 4th (13m.16s) 7th (13m.40s)10th (14m.25s) & 11th (16m.28s) For some reason Freya & Ato's times were not recorded. I'm certain Freya Gannon was the fastest female rider and Ato Qualm-Quashi was motivated and riding well. Bernard is good at cross country running also, he is sixteen years old and came seventh, 24s behind Louis Carpenter who is also sixteen but more experienced. Louis did well to finish 4th as our fasted rider on the day. Kevin Kabey came tenth and Rowena Gordon did well in her first race, she said that her legs were like jelly afterwards.

All our riders enjoyed the event and expressed an interest in training sessions and more racing. Special thanks to cycling parents Chris & Pat Gannon-Burns and Ms. Gordon for coming to help out. The time keeper could have done more but never-mind better next time.

In the afternoon I went to the 'LOVE MUSIC HATE RACISM' festival in Victoria park to celebrate it's thirty year anniversary (I was at the first one) it was good fun and great to be amongst so many open and fair minded people. DJ Hype did the bizzo on the 1s&2s in the dance tent and Poly Styrene was in fine voice on the main stage!

After the party I was out on my bike for an evening training ride out around Abridge and Toot Hill.