Original 2008 Hackney London Youth Games racing cyclist and 2009 competing champion, Kyroah Pang was out with CCH again after several months of trying out other activities - Kyroah's back cycling with CCH - good one!
Before we left Hackney there was a distraction on Downs Park in the multi sports area in the form of a lively cycle polo training session, very skillful riding indeed, impressive stuff there.

Kyroah joined Keir, Joseph, Christian and his son Scott for a town ride tour of East London, taking in the new Olympic stadium via the Greenway and out to Becton for a summit meeting on the summit of the Beckton Alps. From here it was down to the river and a ride along Albert and Victoria docks, home of University East London and the Excel Centre. The route back took in Stratford, the Olympic village and a photo call in front of the nearly completed velodrome. 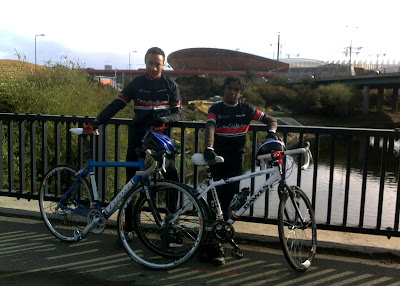