As one of the CCH fundraisers and new to cycling I decided to try out  the French part of the new prospective route from the London Olympic site to Paris. The Avenue Verte/Greenway is a joint Anglo-French initiative helped by Europe, to develop a largely traffic free route between Paris and London (via the Newhaven - Dieppe ferry) for cyclists, walkers and horse riders. It is hoped a route will be in place for the 2012 London Olympic Games.
For the map of the French part of the route please look at the following link which is the one I followed
Route map

The Dieppe to Paris route is approx 119 miles long. The first 40 miles are on a disused railway that passes beautifull villages where you can stop for food. It then becomes rolling hills for about 60 miles and then you enter the outskirts of Paris for the last 20 miles,  which are very busy, but there are great cycle paths pretty much throughout the city.  I would recommend getting  a detailed map of Paris to help once in the city.
You can split the cycling into  one, two or three days  depending on your fitness. On the first day of the tripThursday 24th June we cycled 40 miles and on the second  Friday 25th June we cycled 80 miles and reached Paris.  We then returned on the Eurostar. There were a number of other british cyclists following the route so it is becoming more popular.
If you want to do the route with children I would suggest doing just the first 40 miles on the Avenue Verte and saying in the  beautiful campsite at Neufchatel en Bray or in one of their hotels  and then returning the same way back to Dieppe. I noted quite a few french school groups doing that part of the route.
Its a great trip for cyclists of all levels... Salut Giuliana 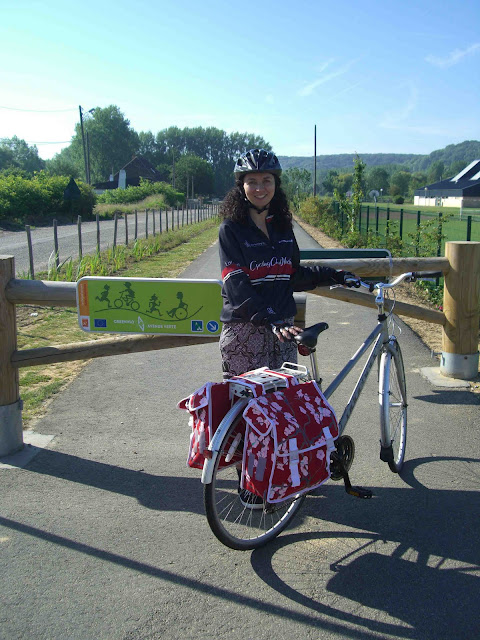