Last Sunday 15th May saw the Hackney borough team claim a dramatic second place overall for the road cycling event in the London Youth Games. Everything seemed to be conspiring against the team with two members coming down with illness and so unable to attend, another rider had their wheel fall off on the way to Lea Valley Velopark  and another whose sat-nav meant them being late and having to run across the Olympic Park, through the tunnel onto the circuit onto bike and straight into a time trial. Oh and it was wet and windy too. Actually the last was a blessing in disguise as all their training sessions had been in the rain and wind anyway.

First race was the Youth AB (under 16-14s) individual time trial- for four laps of the circuit. Sounds easy?Try it full blast next time you are down there. As Ishanna and Nola were unavailable that meant we had only one rider in the category - Laila-Grace Mackenzie Breary. However as the top two times count for the overall points it looked Hackney would be out of the running before the races began. Up stepped Catrin Marsden - who was down ride the Under12s time trial later - to take on the four lap TT as well. Both riders did very well setting the team off in the right way placing 21st and 29th.

Next were the U16 males with Freddy Augsburger, Jonah Jenkins, Elliot Marsden and Maxwell Mackenzie Breary lining up for Hackney. Freddy came this with Jonah three seconds behind in fifth, Elliot finished in 20th place. Whilst these results undoubtedly moved Hackney up the leader board a certain team manager thought well at least they'll finish top ten...

Next up were the Youth CDE (under 12/10/8) time trials. First up and still recovering from her ride in the U16s Catrin took on the two lap TT for the team and did very well. Next up was Isobel Ellson doing really well in her first big competitive race. Then came the dramatic late arrival of Zhané Pilgrim - with no time to warm and possibly the strongest winds of the day to contest against she also did her best - things were looking good for the team.

The U12 boys followed with Arthur Steer first off for Hackney producing third place - only half a second off silver. Victor Sarramian Oglaza went next finishing his first big event in 16th place. It began to look like maybe we could place top five?

In the afternoon the format changes to circuit races for the U16 male and female riders. Hackney were unrepresented in the girls race and so wouldn't score any points for the overall. Fred and Jonah raced in the boys race - Jonah looking pretty poorly by then - in quite horrible conditions. The majority of the team retreated back across Hackney marshes to get dry. Both riders tried to force the action in the race but the bunch wouldn't be split. It came down to a bunch sprint with Freddie narrowly beat into second place and Jonah sat up in the last lap having down his all. 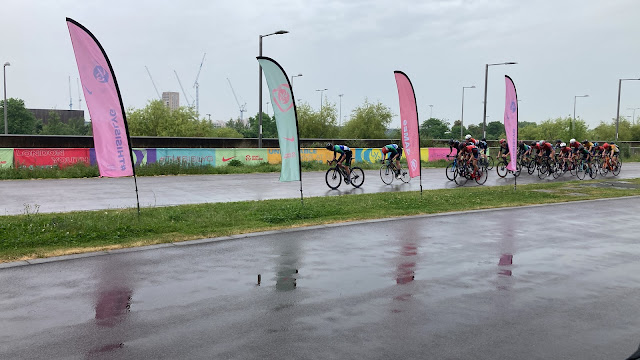 So down to the last drama of the day after Freddie had received his medals for the TT and road race along with the other podium finishers it was time to announce the overall top three. We decided to hang on and congratulate whoever it would be - surely not Hackney though. Third place went Lambeth and old friend Joe, then the announcer dragged dit out explaining the top two teams had finished on equal points so the winner would be decided on count back placings in the events. Second place went to Southwark and then after bit of confusion they were handed gold medals instead having had two first places. Second place went to - Hackney! We were very surprised to say the least but once again strength in depth push the borough on the podium. A great result for all the team and squad.