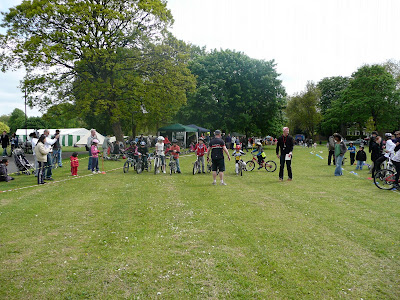 Thirty four riders turned out for the Grass Track event at Well Street Common Festival on
Sunday, and many more supporters were cheering them on from trackside. The racing was
competitive on the 150m course and the rain kept off until the final race. Thanks to all who came along and made it an enjoyable event. 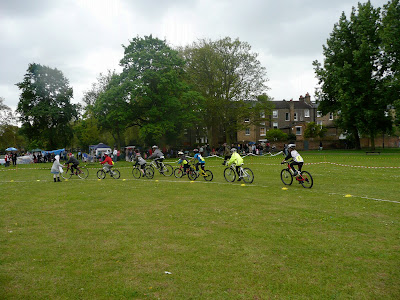 More photos from the event can be found here
- http://www.flickr.com/photos/cch-neil/
Full race results below - apologies in advance for any typos 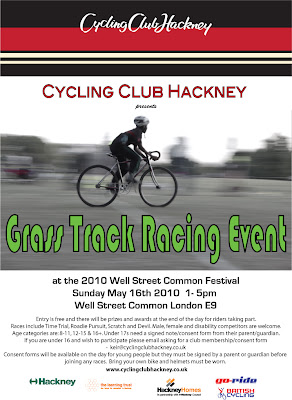 Cycling Club Hackney presents a Grass Track Racing Event at the 2010 Well Street Common Festival on Sunday May 16th 2010 from 1- 5pm, at Well Street Common London E9. Registration from 12 onwards. Entry is free and there will be prizes and awards for riders taking part.
Races include Time Trial, Roadie Pursuit, Scratch and Devil
Male, female and disability competitors are welcome.
Age categories are: 8-11, 12-15 & 16+. Under 17s need a signed note/consent form from their parent/guardian. If you are under 16 and wish to participate please email asking for a club membership/consent form: keir@cyclingclubhackney.co.uk
Consent forms will be available on the day for young people but they must be signed by a parent or guardian before joining any races. Bring your own bike and helmets must be worn.
Volunteers and helpers needed on the day for time keeping/ marshalling etc - contact neil if you can help - mail@neilirons.co.uk

The Hell of the East - the 3rd ‘Ronde Chelmsford’

Sunday morning saw a dozen foolhardy souls turn up in atrocious conditions at Lea Valley Ice Rink for the 3rd ‘Ronde Chelmsford’. Reluctantly they set off into the driving rain and gusting headwinds it really was beginning to resemble the Paris –Roubaix at its worst with the potholes substituting for the cobblestones. In what was quickly becoming a battle of attrition it was only a matter of time before riders started baling out - literally - with the likely looking result that no one would complete the full 160km loop. By the time the Matching Green was passed only four riders remained - Patrick Fields the old master of the long distance ride, Dave Moreno and Sean Marlowe on their recumbents and Neil Irons on his hybrid that should have given up the ghost long ago.
They pushed on through the ECCA Senior Championship Road Race at High Easter and some locals on an organised Fun??? Ride and on up North Hill to some very welcome Tortillas and Teas at Danbury. A few more coffees and teas allowed the weather to clear a bit and they set off downhill with the wind finally at their backs.
Dave set off on an elite ride of one leaving the others to work out if they were in the points or on the bus. Bumping into an incredulous Clem Berril – incredulous that anyone started never mind finished - as they hit the start of the Lea Bridge Road he kindly drafted them in to the finish at the Princess of Wales. 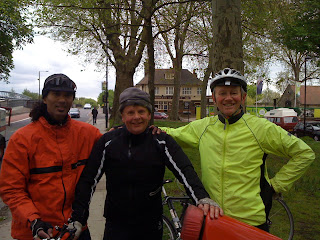 Sean Patrick and Neil 160km later still smiling and still wet.
In future years - who knows - the 2010 ‘Ronde Chelmsford’ may become one of those epic tales that hundreds ‘remember’ – well there are four riders who will beg to differ.
Posted by Neil at 11:07 2 comments: