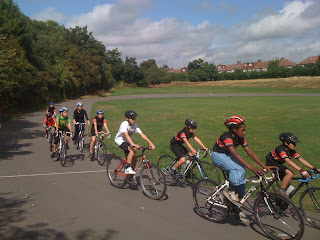 Shaquille and Jake lead out the riders.
Saturday saw a good turnout when twelve CCH juniors travelled up to Tatem Park in Edmonton with Andy and Neil to check out the roller skating track for training purposes. Although its only a half hour cycle ride away we decided to go by train to maximise the time spent on the track. A short ride from the club house to Rectory Road station followed by a ten minute ride to Silver Street saw us there in 20 minutes. 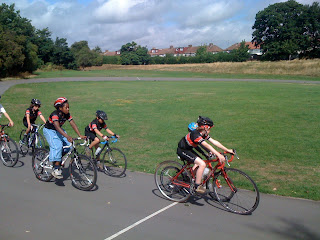 Tatem Park's 225m track
New members Elliot and Jack slotted right into the training and everyone posted good times on a 1 lap standing start. thanks to Anna and newcomer to the club Dave for helping out - the kids put him through his paces when they were doing "behead the snake" - but he did say he wanted do more cycling so... 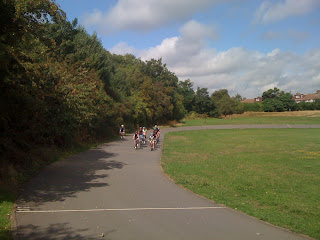 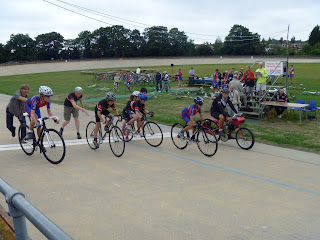 Logan and Ned start off in the Keirin.
Saturday afternoon also saw the Grand Finale of the Track League at Herne Hill Velodrome with regulars Ned and Logan taking part in six races. These included a Keirin and Le Mans style start followed by a 1 lap dash which entailed running from one side of the track to the other finding your bike and jumping on. Peter ensured it was harder than it sounds by tangling up the bikes and hiding some of them over the rails. 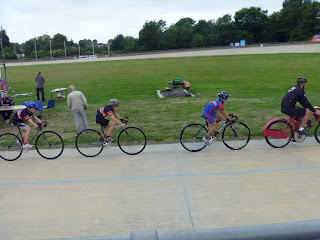 Ned and Logan in the Keirin
Full results of the Track League and final standings can be found here - http://www.hernehillvelodrome.com/results 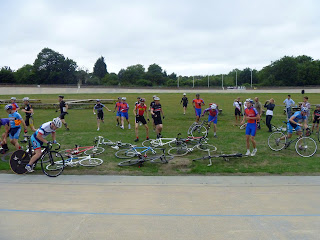 The chaos of the seniors le Mans dash
Posted by Neil at 09:37