I've been a bit remiss with the race reports recently - mainly because there is so much racing going on. So here goes - on the international scene Tao has been busy in the UCI Junior Nations Cup in Croatia and the Czech republic where he finished 7th on stage 4. This was the same placing he achieved in the Mens Juniors National Road Race over in Wales - a very good result in his first year as a junior. More info on these and what Tao is up to can be found on his blog here. 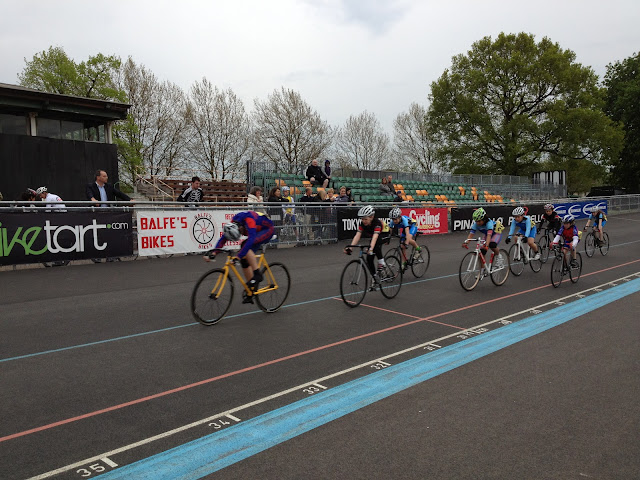 Under 12s action at Herne Hill.

The Wednesday night Track league at Herne Hill Velodrome is finally up and running after many cancelations due to rain. CCH have been well represented in the Youth and senior races with Andy picking up a couple of wins last week, whilst Bede and Logan got a win each.


Friday nights have been brightened up with a new addition to the race calendar. The new Cyclopark at Gravesend in Kent has been hosting the Spring at Cyclopark youth crit' series. This new venue officially opens next week and boasts a large road circuit with lots of loops and a long drag of a hill, a very gnarly looking BMX track, lots of MTB trails, a skatepark and a playpark- so something for all the family there. CCH youth riders have attended each of the 4 events so far with last friday producing a a 2nd and 3rd place for Logan and Isaac.


Last saturday saw the third round of the LVYCC summer series take place at Hoghill. CCH youth turned up in strength with 19 riders turning up ready to race.


First up were the U8's with Stan, Robbie and first time racer Alessandro riding for CCH. Sensibly the youth races are now starting on the bottom circuit instead of following the commissaires car down the Hogberg. Stan placed 4th again - seems to be his favourite number - whilst Robbie was 11th. Unfortunately Alessandro had a crash but here's hoping he doesn't let it deter him from trying again as he was doing well.


Next up were the 10's with Kai and Ewan finishing 5th and 6th and Harry 12th in a close fought race.

The u12's race had nine CCH riders with the superiority of numbers showing in a one two finish for Logan and Isaac following their 2-3 finish from the night before. All the riders did very well with Molly getting 3rd place for the girls.


Ned and Mostyn were made to dig in and work hard in the U14 race whilst Alex had a great race in the U16s coming second - full results from Hoghill here. It was a great showing by the Youth team however I know with the numbers we have turning up for training on a saturday we could have nine riders in every race. So if you've not tried it yet get down there for the next race in the series.
Posted by Neil at 20:54