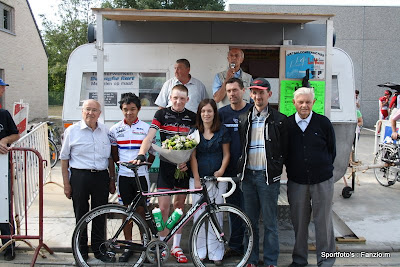 The British Olympic Association announced the athletes selected to represent Team GB at the 11th European Youth Olympic Festival in Trabzon, Turkey between 23-30 July. Tao Geoghan-Hart has been selected to ride for Great Britain in the road race alongside Christopher Lawless and Jacob Scott. Details here. Let's all wish Tao well in his endeavours to bring back a medal - the picture shows him after winning a race in Belgium the other week.
Posted by Neil at 21:35